Today you find out where the "picking" comes from in my blog name.  Friend Mandy and I went picking this weekend.  Saturday, there was an auction in a nearby town and we started there. 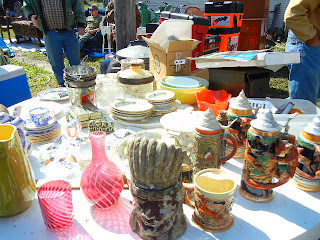 Despite the mud, cool temperatures, and bikers we stayed for most of the morning.  When they started to sell the motorcycles, we left for greener pastures. 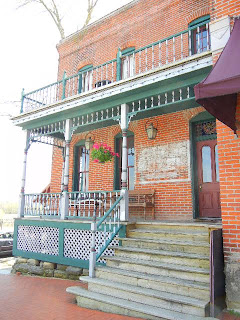 Blackwater is a nearby town, an old railroad town.  This is the old restored hotel.  It is now a bed and breakfast and restaurant.  I had heard it was under new management and very good, so we stopped in here for lunch. 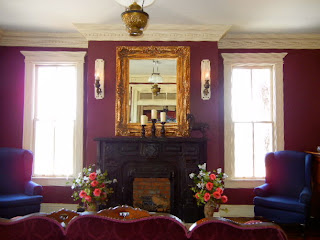 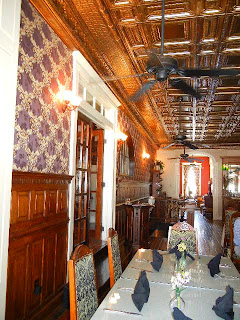 As reported, the lunch was very good and we plan a return visit some evening with the husbands.


On to the Midway Antique Mall,  which started life as a livestock arena, so is really large.  (Sorry, I forgot to take a picture.)  We only made it through half of it, but came out with some treasures.  Here's some pictures of my "pickings".

There has been a Quilt Camp in our little town for many years.  I had never attended due to work, personal commitments, my own projects and life in general.  Last year a friend was planning to stay with me while she attended, but had to cancel at the last minute.  The director asked me if I wanted to attend in her place.  I hurriedly put some fabrics together for two of the classes and rearranged the rest of my life.  It was a lot of fun and ironically, I am going back this year as a teacher of the mystery quilt class.  Anyway, I recently finished the last project and can now take it to the first night "Show and Tell" event.  Here it is: 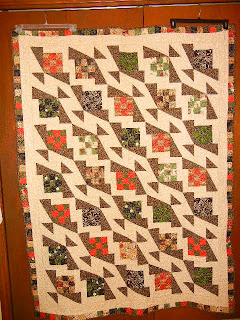 It is called Topsy Turvy Nine Patch and was taught by Klonda Holt.  The "wings" on the nine patch are paper pieced.  It was my first experience with paper piecing and I learned a lot. 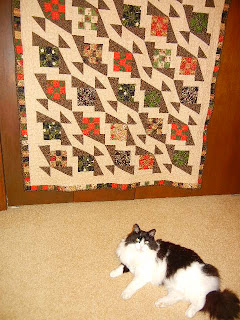 Zeke, the cat, is always lots of help in the sewing room.  I guess he thought I was trying to photograph him.

Don't you love the backing?  (The camera did something weird and changed the background color of the blocks.  It should be creamier.  The backing should be brown and black.)
The nine patch fabrics were scraps and the "wings" were a fabric from my stash.  The background and backing were the only fabrics I purchased, so it was something of a stash buster.  I like those.  To me it looks like geese in formation although some of them are going the wrong direction. 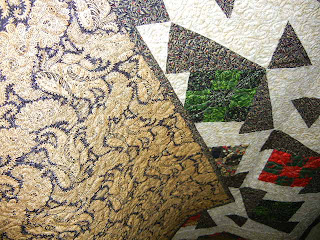 I like having several projects going at once, usually something to piece, a needle turn appliqué and something pulled together for a new project, just in case I get a block of time or a retreat comes my way.  My current go-to piecing project is a scrap quilt featuring uneven nine patch, in rows set on point.  Here is the pattern, (American Patchwork and Quilting, April 2011. on the cover) 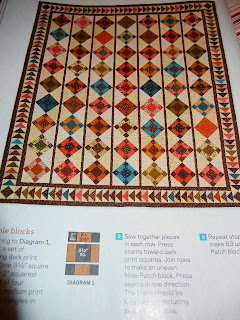 Our quilt guild meets to sew together one Saturday a month, so this last Saturday I finished all of the nine patches (63) and started on the flying geese (144). 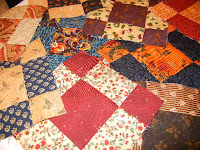 Needless to say, I am in no hurry to complete this, it's really about the process.  It will probably be put away while I work on something else.  I'm thinking about a patriotic quilt.  My grandson just enlisted in the Navy and I think his mother and I should have something red, white and blue.  I bought a jelly roll of red/cream/blue not too long ago, maybe that will be it.  I'll keep you posted.
Judy

My guild met Tuesday night and I was looking forward to our program.  I love antiques, I love sewing...what could be better than combining those interests in a program titled, "Sewing Tools From the Past".  Our guest speaker was Anna Mary and she had an unbelievable collection of everything sewing related, some from the recent past and some from many years ago.  Someone asked how she got started with her collection and she replied "I never knew I was collecting.  When something went out of style, I didn't throw it away."  I can sure relate to that.  Here are some of my favorites:

A collection of miniatures and toy sewing machines. 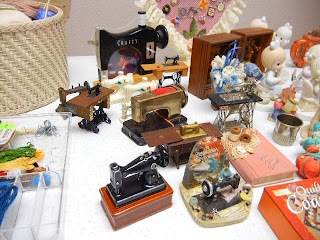 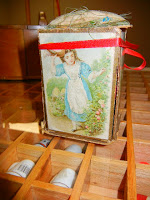 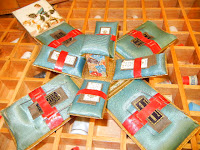 She called this an "etuis"  pronounced etwee.  It is a folding sewing kit.   > <

I thought this was a beautiful sewing kit and reminded me of the one I made in 4-H when I was 9 years old.  Mine started with a cigar box and wasn't nearly as pretty. 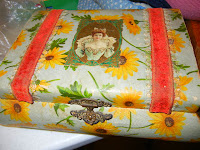 These are pin pillows.  She said her collection started with pin cushions.  She had some lovely ones. 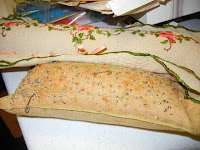 Anna Mary also had a very informative presentation which she gives to various groups.  If you are interested in having her to your group, e-mail me or comment on this blog and I will send her information to you.

Have you ever had a week when you flitted around, starting and stopping different projects, never completing much of anything?  I had one of those last week.  We had a lot of family here for Easter, so I had some housework calling my name.  Then, for the past few weeks, I have been contemplating some changes in my sewing room, but since it involved carpentry and power tools, I had been hesitant to move on it.  Just not quite as comfortable with those tools as I am with rotary cutters and rulers.  But last week, I decided I would never know if it would work until I tried it.  So I said "I'm goin' in".
I had a folding cutting table that was about 25 years old, I bought it about the time I learned quilting with a rotary cutter.  It was frustrating me because it took up so much space with all that wasted space under the table.   So, here is the finished product. 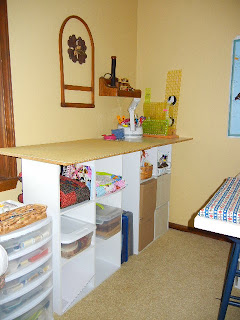 I bought two of those 6 cube closet storage units, removed the folding leaves from the old cutting table and put them on top of the cubes.  I have plenty of cutting space and storage underneath.   The cubes are 36" tall, so just the right height.
Success!!
I only bought 4 of the canvas drawers until I made sure my scheme would work,  but plan to pick up more when I am at Target.  By the way, Target has the cubes, but I found mine on sale at Michael's. 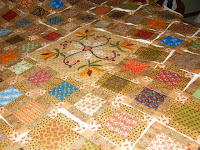 To the right is one of those unfinished projects that haunt all of us.  This was a kit purchased in Florida appoximately 6 years ago.  I took it to Florida with me in January and put the little "puss in the corner" blocks together, as well as doing the center applique'.  So now it is laid out, ready for sewing together.  It is set on point, so will take some time uninterrupted by daily life.  Hopefully, tomorrow.  I love the colors, so am anxious to get it together and quilted.


Last Friday, Paula and I went to "The Gatherin'" in Stover, MO.  This is a great event, approximately 30 shops represented under one roof, most of them quilt shops.  Then, little bitty Stover boasts three quilt shops in the town.  And... about 10 miles from there is a Mennonite area with two more shops.  I went with a list to avoid just buying willy-nilly.  I needed small florals for our stash builder fabric swap at Guild next month.  > 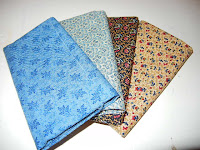 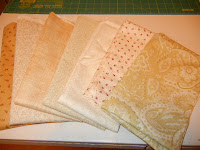 My neutrals and backgrounds were getting a little sparse, so found these great fabrics at one of the Mennonite shops.
< 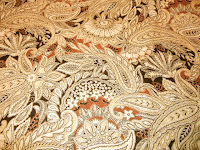 < Our guild does birthday blocks, so I bought this fabric to give each participant making my blocks in October.  Hopefully, my blocks then will all coordinate.  Although, I'll have to say that last year's blocks went together surprisingly well. ( I'll leave that for another day and another post.)


These two projects are some of what has been distracting me from that kit quilt mentioned earlier.  I had to have these carrots for Easter... 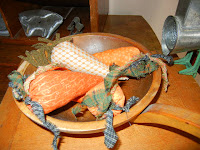 And this strawberry has been calling me from one of Maggie Bonanomi's books for quite some time. 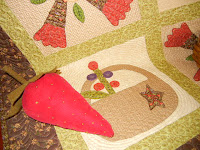 She used cotton velvet for it, but I couldn't find any cotton, only nylon or rayon, so used fine wale corduroy.  I still like it.

That's all for today.  Quilt Guild meets tonight, so maybe I'll have something interesting to share with you tomorrow.
Posted by Judy Smith at 4/09/2013 No comments:

Last week, I traveled to Liberty to help with my granddaughters on their spring break, and was finally able to visit the wonderful craft studio of my niece, Elsa. This has been a dream of hers since they built the house several years ago and is finally complete.  She has been accumulating old cabinets and storage pieces for some time and recently had the ceiling and walls finished so could formally move in.  It is a large open space with lots of natural light and looks out on a wooded area on their property.  The space is divided into about five different areas, with the storage pieces defining each area.  Here are some pictures: 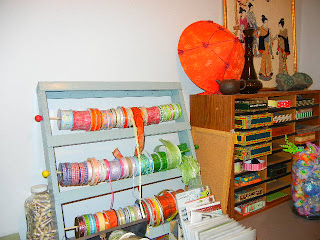 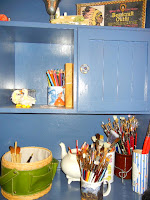 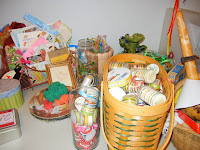 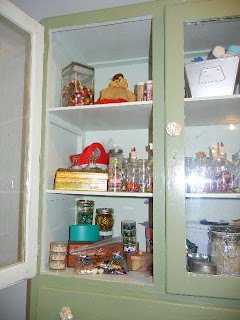 Lots of baubles in this cabinet.

While we stitched, the kids worked on "fairy houses".  There was lots of paint involved, but eventually they should look like Elsa's, pictured here: 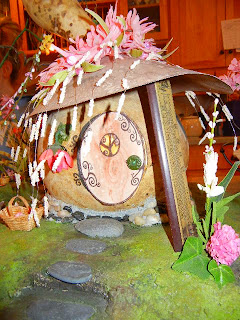