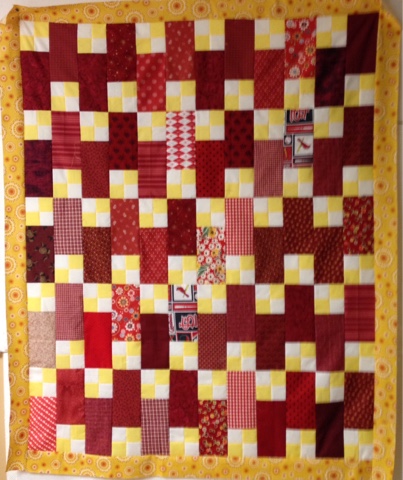 It's time to report on the Rainbow Scrap Challenge for September.  The colors this month were rose red and yellow.  Since I'm making crib and toddler quilts for boys for a local charity, I chose to go with more of a primary red.  This is bricks and cobblestones from the Bonnie Hunter free patterns on her web site and went together really quick.  The yellow in the 4patches is Kona (Daffodil, I think).  A lot of the Reds were from a scrap bag I bought at a local quilt shop.  See the St. Louis Cardinals fabric? 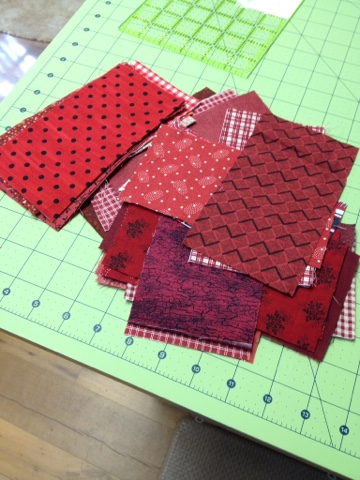 I had lots of bricks left for another project and would certainly make this again. 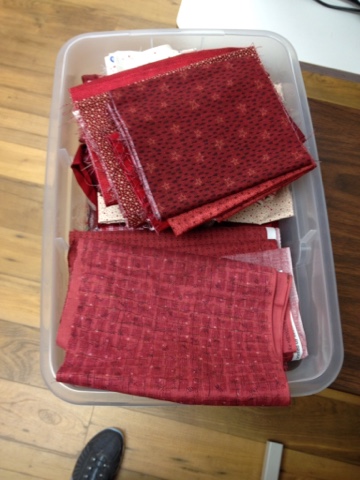 My red scrap bin would barely close before I started.  Look how neat is is now!

And here are my Fathers Choice blocks from CW fabrics for my quilt I will keep.
I will link up with So Scrappyhttps://search.yahoo.com/search?p=superscrappy.blogspot.com//09/scraphappy-saturday-raining-roses.html&fr=ipad for the show and tell.  We get a new color on Oct. 1., so must get this one finished.  I need to
Keep on Stitchin'
Judy
Posted by Judy Smith at 9/28/2016 1 comment:

At the last minute I decided to enter a couple of quilts in the online quilt festival over at Amy's Creative Side. http://www.amyscreativeside.com/2016/09/19/bloggers-quilt-festival-fall-2016-edition/#comment-2008821. There are some beautiful quilts to browse through, so hop on over and vote for your favorite.
I am entering Allitare in the Free Motion Quilting category. 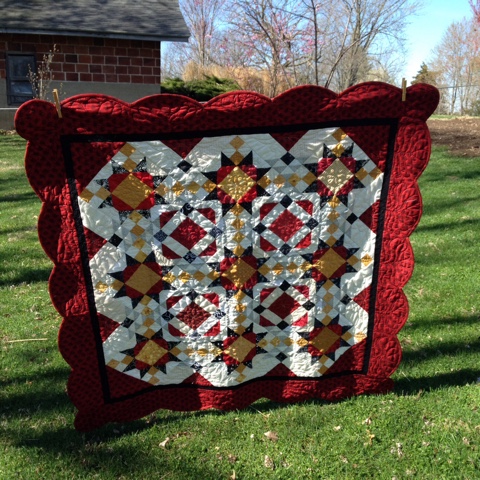 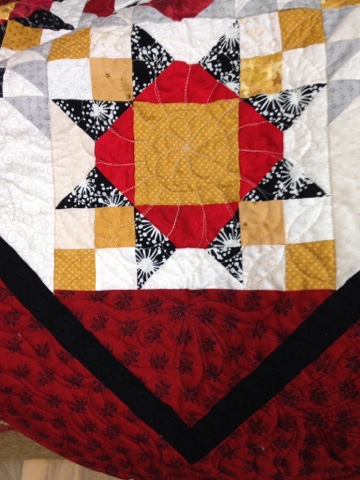 And my Blue Orange Peel in the appliqué category. 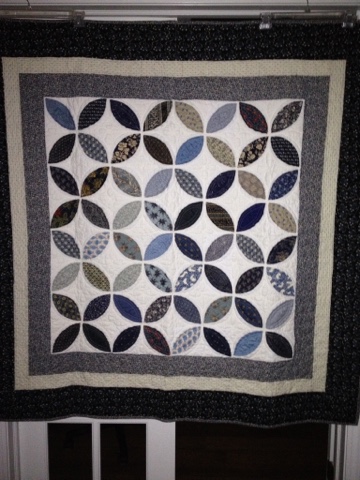 One of my favorite Quilt Guild activities is swapping stuff, any kind of swapping; strips, charms, blocks.  Our Swap Queen, Gina plans our swaps and they vary by the month and year.  We do some type of fabric swap every month and then do a block swap over a period of time, six months or a year. Currently, we are doing tiny (3-1/2") Civil War nine patches and little red/white blocks.  Last year, we did 6-1/2" scrappy nine patches in Autumn colors and I brought 80 blocks home at the end of the year.  Wow!  What a bonanza!  They have inspired lots of Internet and magazine browsing, looking for different ideas for using them.  I finally settled on Sisters Choice, a free pattern on the Bonnie Hunter website. My plan was to make it for a donation quilt, but I love it so much that it may have to live with me awhile before moving on. 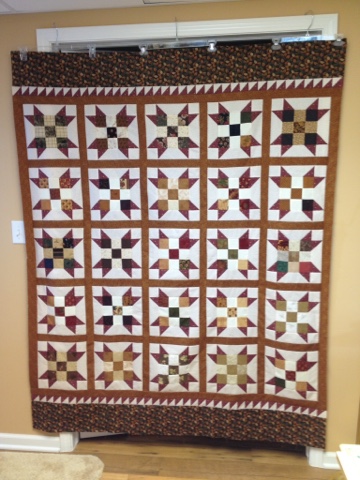 All of the setting fabrics came from stash, some of it well-aged.  The star point fabric was originally purchased at a quilter's estate sale, so I'm sure it was well-aged too.  The sawtooth border was constructed from the bonus triangles from the sew and flip star points.  I still have more of those to use in another project.
Editing this post:
We are having some beautiful weather here in Missouri.  Last week, while picking up our mail, I decided to take the Sister Choice along.  There's not much color in the leaves yet, but I found this fence rail to stage it for a photo. 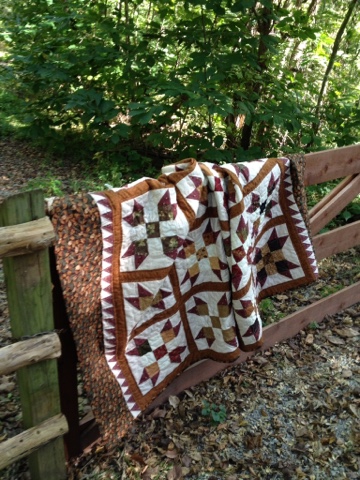 It's all finished and ready for the quilt show next week. 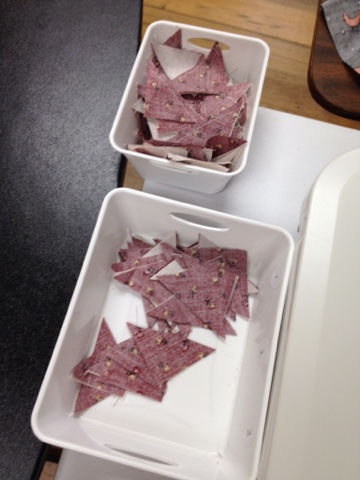 With that quilt finished, I decided to have some fun with experimenting with a new technique.  New to me anyway. 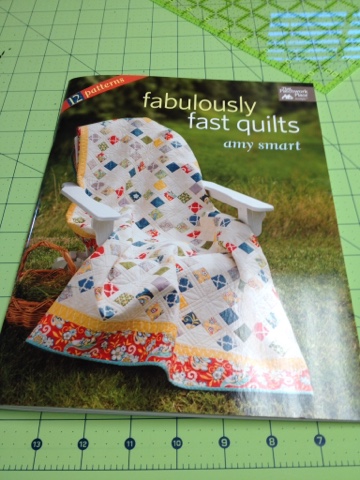 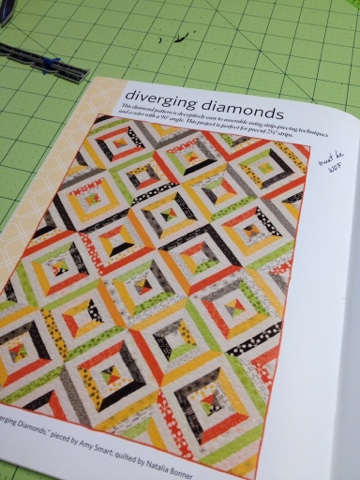 I've had this book for awhile, and have been interested in trying this technique. I thought it would be fun to experiment with Halloween fabrics. 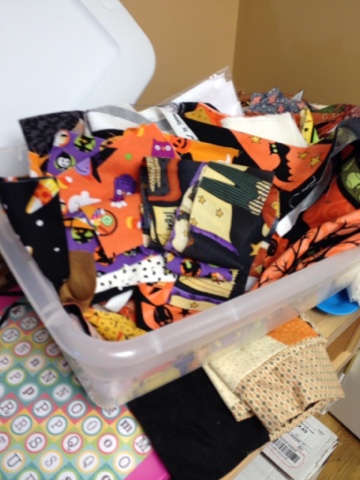 You sew strips together into a tube, then slice into blocks, using the 90degree line on a ruler. 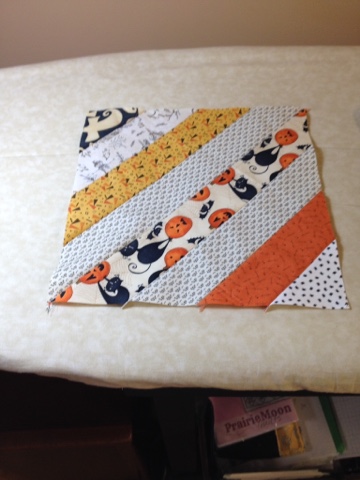 They look like a string block, but are much faster with no paper to tear off. The downside?  They have bias edges. So, out came the Best Press.  The instructions made an 11" block, but called for  42" strips.  Most of my scraps were from fat quarters, so I adapted the pattern and made strip sets with 4 strips instead of 8, avoiding a lot of wasted fabric. 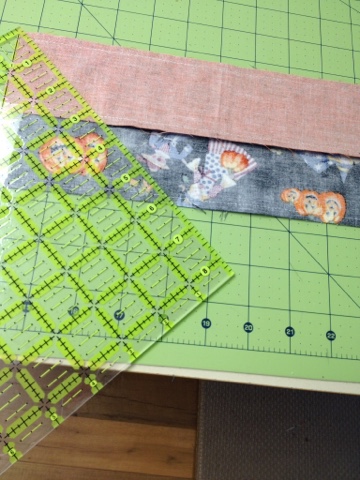 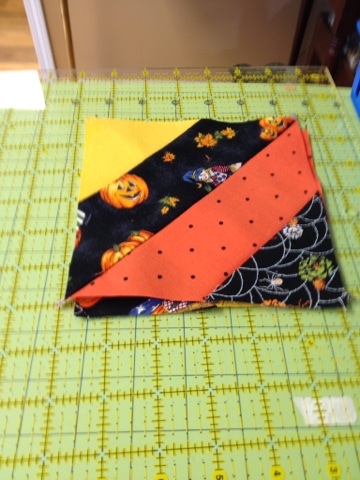 Now, what do do with those cute little blocks?  I found a panel in that scrap bin that someone had given me.  I had always liked it because of the dancing witches.  The little string blocks made a great side border and I soon had another flimsy to add to the TBQ (to be quilted) stack. 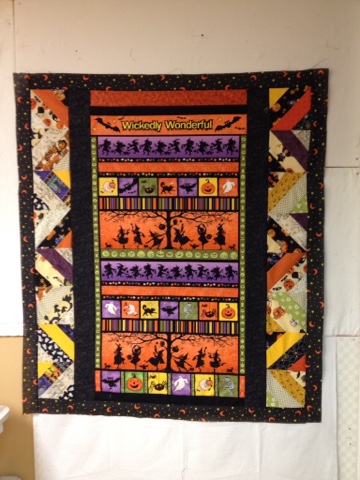 Often, my experimental blocks end up in the orphanage, so it was nice to have something to show for an afternoon's playtime. 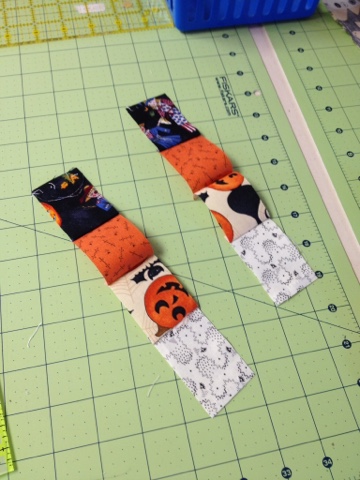 The scraps got cut into these little pieced strips to use in something else.  What is my takeaway from this little experiment?  Not a good scrap buster, because it creates more scraps.  A quick method to make big blocks from WOF strips, like a jelly roll, but not as efficient for shorter strips.  Then there are those bias edges, which I dislike.  Will I use it again?  Probably not, but never say never.
Meanwhile, I'll keep on stitchin'.
Judy
PS;  I'm linking up with Cynthia at http://quiltingismorefunthanhousework.blogspot.com and Judy at http://www.patchworktimes.com/2016/09/12/design-wall-september-12-2016/ today.  You'll find lots of fun there.
J.