Tired of Winter Yet?

My husband told me my winter decorating was prolonging winter (is there any logic to that?), so I put it away this week and unpacked the Spring stuff, just in case he's right. 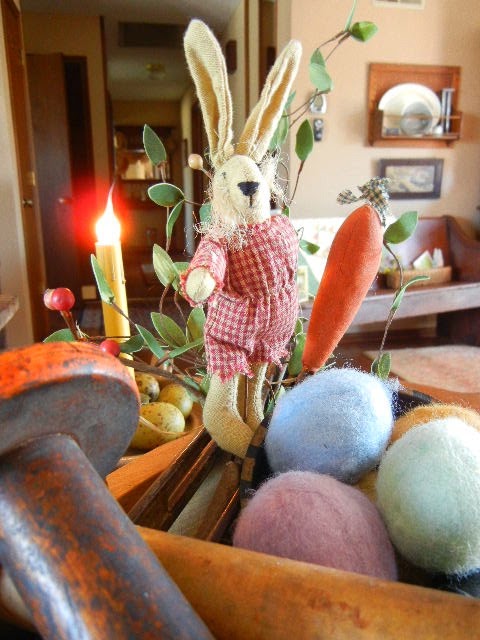 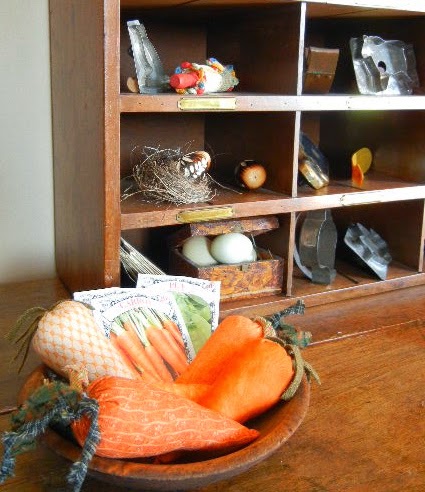 I made those little carrots last spring.  They were fun.

I am progressing on the Split Nine-Patch blocks.  I think I have 22 now.  I have no idea how big I will make it.  Right now, it's all about enjoying the process. 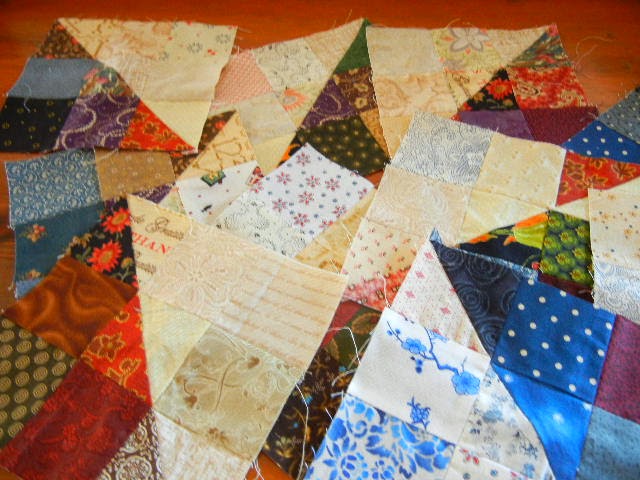 Speaking of cute blocks, I have some favorites.  Churn Dash has to be right up there close to the top, but Uneven Nine Patch is also one of my favorites.  I saw this pattern in the American Patchwork and Quilting April 2011 a couple of years ago and thought it would be a good way to use fabric from my scrap bins and have a little piecing project around for a day when you just want to sew, but not start a major project. 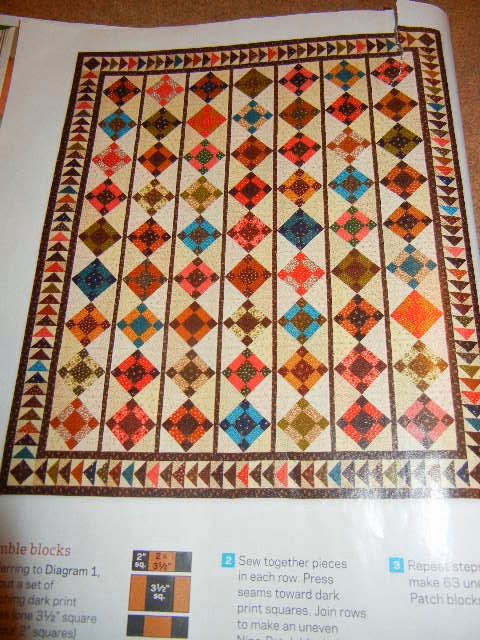 So here it is in 2014 and I have the blocks done and the flying geese done.  It's time to start putting it together, my least favorite part of the process.  I didn't realize how challenging those long rows would be.  The setting triangles are put on first, one on top right and one on bottom left of the block on point, making sure they are going the right direction.  My small design wall won't hold an entire row, so the bottom two blocks are draped across the floor. Here is the way they are looking and I'm using this… 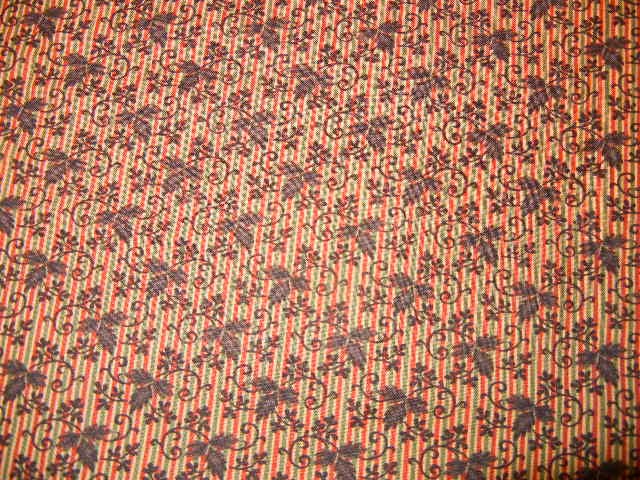 for the strips between the rows.  The pattern calls for making that strip 1 1/2 inches, but I am making it wider, 3 1/2 inch, I think.  I had about three rows done and decided I should make it a king size quilt, so I took those first three rows apart and added another block to make the quilt longer.  If my calculations are right, the 3 1/2 in. joining strips should make it wide enough.  At this point, this thing is spread all over my sewing room, so there is no room to work on anything else.  I think another day of sewing should get it contained.

I have to share a tip I stumbled across a couple of weeks ago.  I was struggling to put quilt sandwiches
together in preparation for machine quilting.  My knees don't do crawling anymore, so I have been working on a five foot table.  As you can imagine, getting the backing taut enough was a problem.  I found this suggestion in one of my books on machine quilting. 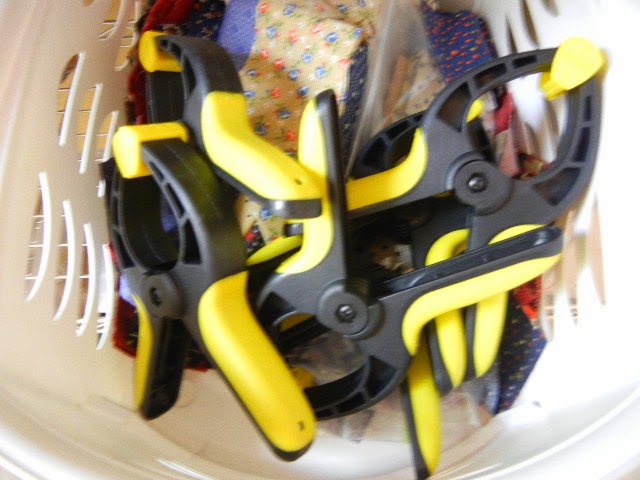 They are spring clamps that fit over the backing and clamp it to my table.  I then spray baste the batting and top to the backing, section by section, re-clamping it each time I move it.  It worked great!  They were $3.00 each at Westlake Hardware.  I bought six.
Here's the quilt I finished, using my new clamps. 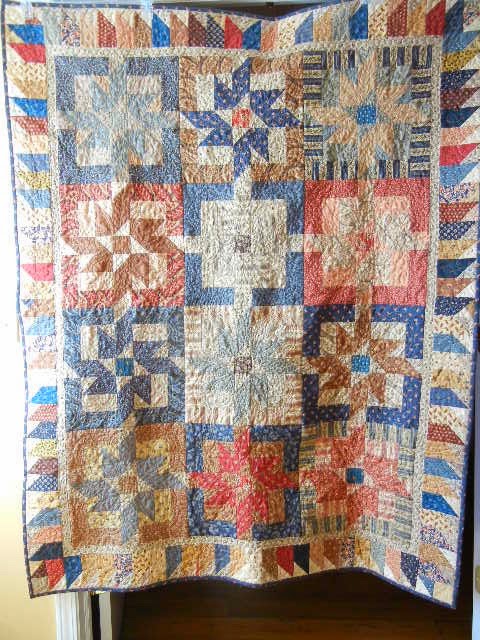 Some examples of the quilting follow below.  Look how smooth the backing is. 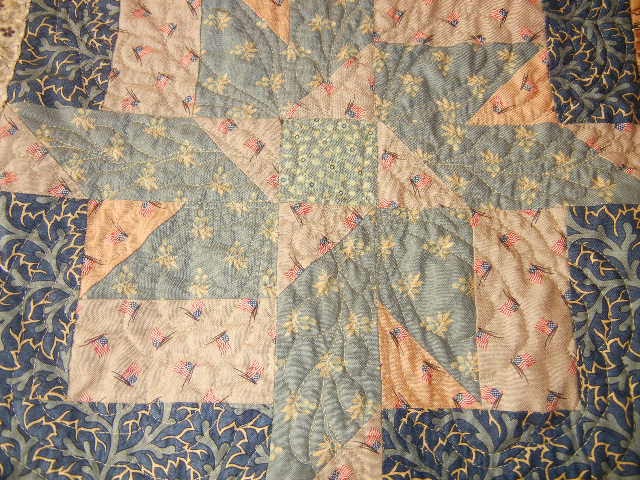 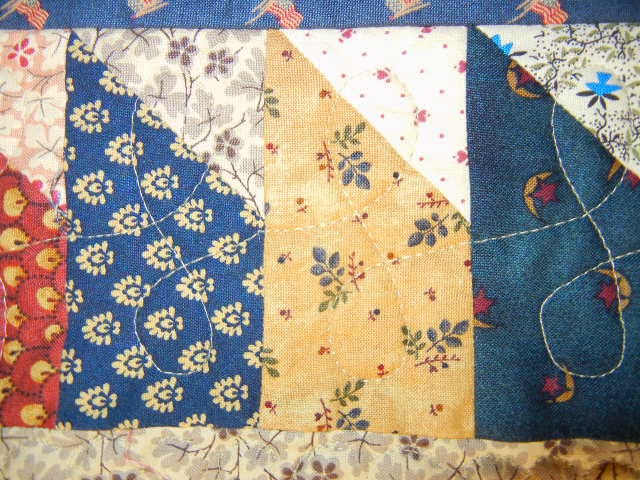 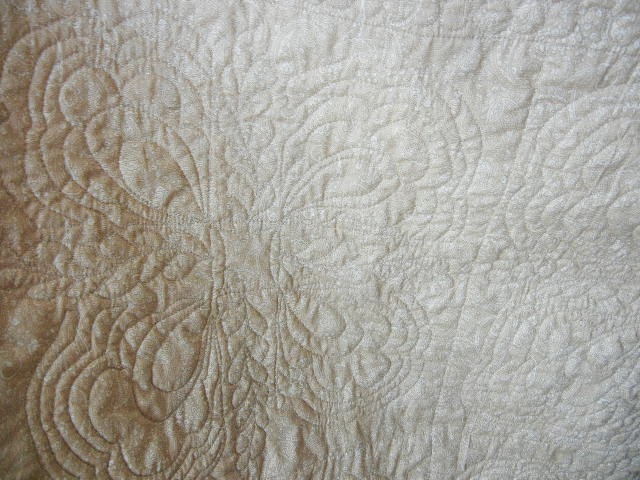 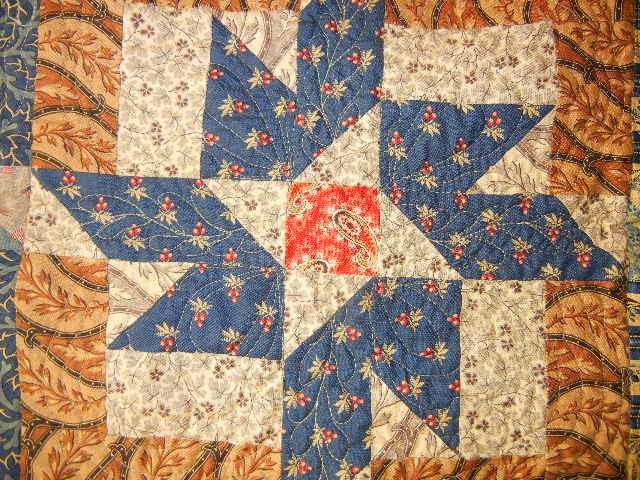 It was made from a Barbara Brackman jelly roll, a Kim Brackett pattern, I believe.

Now for the pictures of my Singer 301.  It required some work before it would sew, but it is working like a charm now. 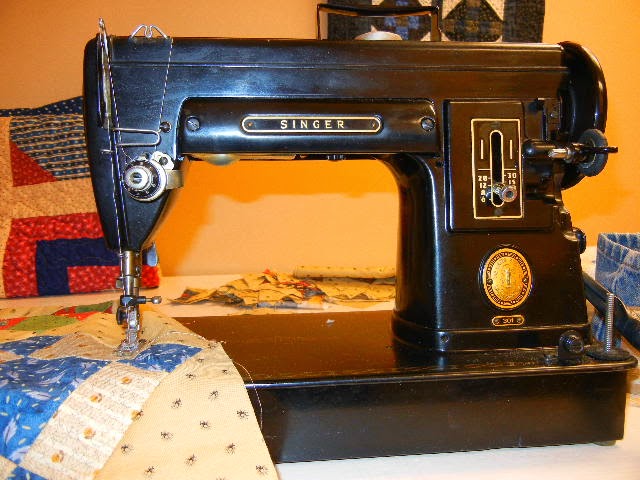 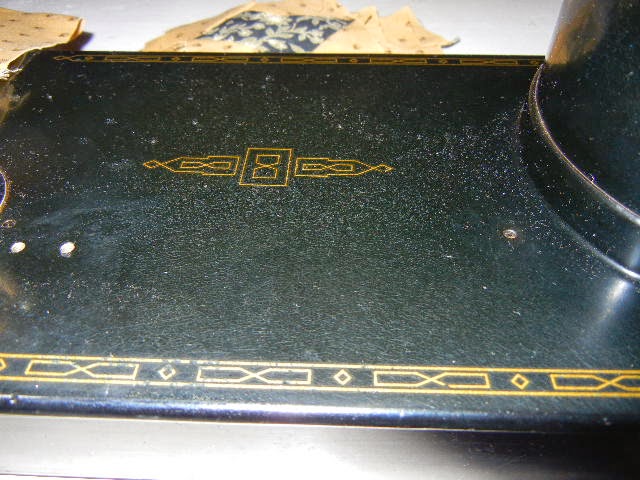 I find it interesting that the decals in the 1950's were so much simpler than those elaborate designs earlier in the century.  I guess Singer wanted you to know that this was a no-nonsense machine, made to be a workhorse.  You will see a lot of these machines in the brown and brown/cream painted versions.  I'm sure they appealed to those modern women of the 50's more than this black one with the simple decals.  It is a 1951, but not badged for the centennial.  It must have been manufactured early in the year.
Enough for tonight.  I have jumped around a lot, hope I didn't lose you.
Judy

A little pickin', a little stitchin'

I haven't posted much about picking lately, not that I've lost interest, but the weather in Missouri has not been conducive to antiquing.  There's always antique malls, but I have never found a lot there.  All of our local shops have been closed and the weather discourages road trips.  I did receive a wonderful item for Christmas.  When I found my treadle machine in a local shop, I also saw this adorable doll trunk, complete with bisque doll and handmade clothes.  It was about three weeks before Christmas and I knew I wanted to buy the treadle, so I disciplined myself to merely talk about the doll trunk, rather than buying it.  Much to my surprise, it appeared under the Christmas tree, through a joint effort of my husband and daughter.  Here's the pictures: 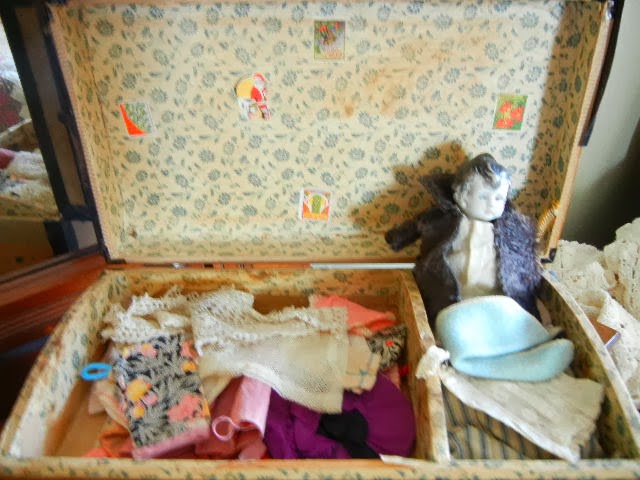 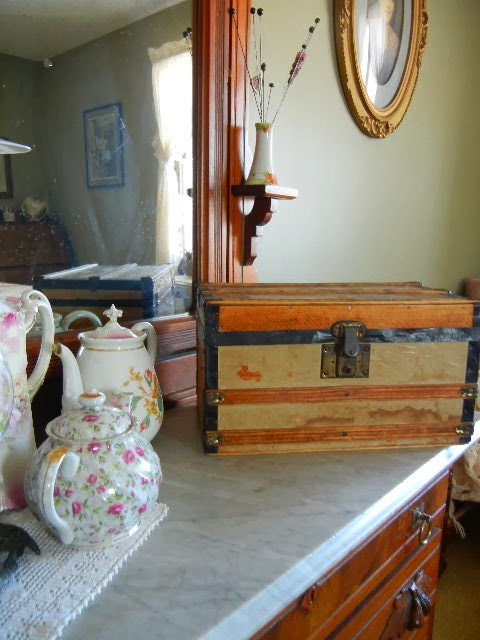 I love how the lucky little girl to receive this put Christmas stickers on the inside of the lid.  What is truly amazing is how it has remained intact through the years.

All of the time spent inside, in my case, leads to lots of web browsing.  If I could just limit myself to other blogs, Facebook, email, etc. it would be ok, but there is always eBay calling my name.  First I shopped for a vintage 301 Singer, which I found and bought, but has not arrived yet.  I will save that for another post.  Then I started browsing sewing accessories and look what I found! 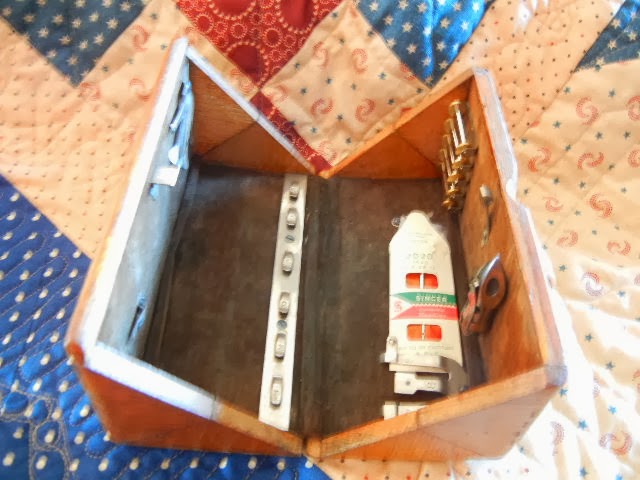 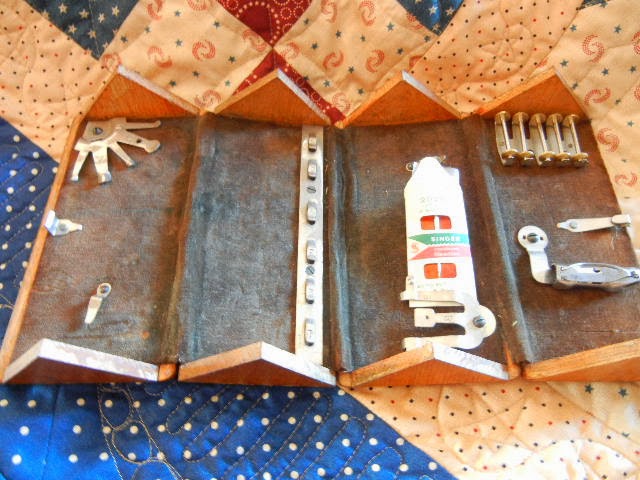 I believe it is called a puzzle box.  I don't think that is the original name, I think that is a modern day interpretation.  It was an accessory box for some of the Singer treadles.  All of the metal pieces you can see are clips to hold the accessories and they are all numbered.  The little shuttle spools fit perfectly in the clips in the upper right corner.  My spare shuttle fits on the clip on the lower right.  And….when folded up, it fits perfectly into any of the drawers in the cabinet of the treadle.  It is made of oak and the corners are dovetailed.  The stamp on the front says "Patented 1889, February 19".  The inside is lined with brown velvet.
This last item was given to me by a friend after I did some alterations for her.  She brought it home from Russia several years ago. 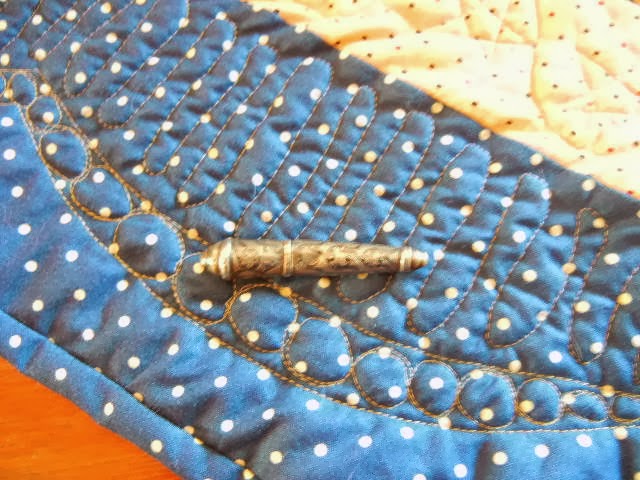 It is a silver needle case.  It has lots of engraving which is hard to see in the picture. 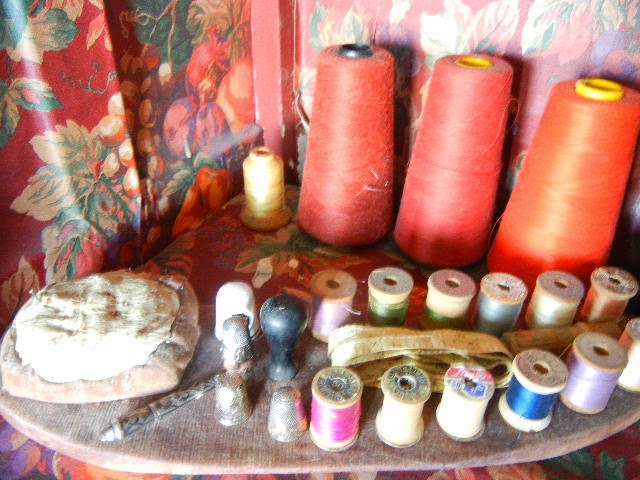 It resides with some of my other collectibles in the room with the treadle.

I have been doing some stitching, mostly quilting on the QOV that I'm making for quilt guild.  That took most of last week.  I bought a used Viking Megaquilter and feel like I can finally make some progress on this front.  Here's some examples of the latest efforts. 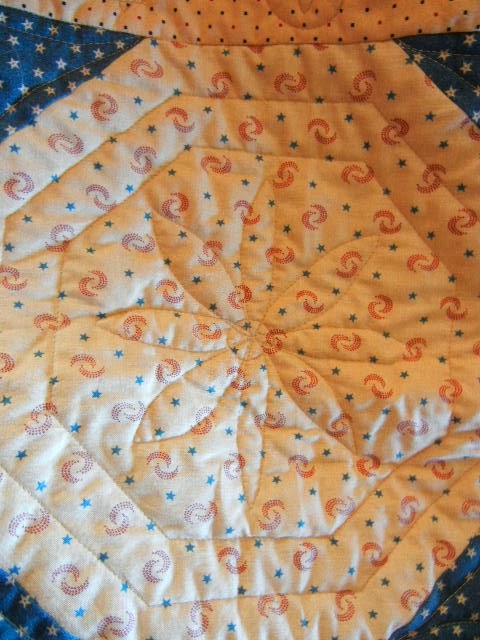 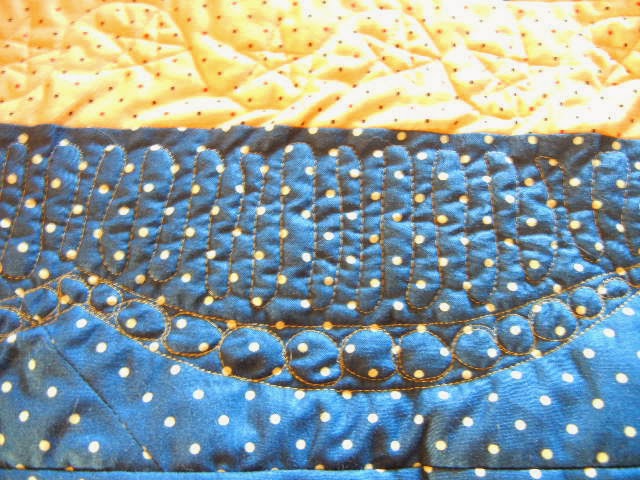 I have long admired the Dear Jane quilts made by other people, but thought it looked pretty overwhelming.  A couple of months ago, in one of my browsing expeditions, I ordered the book so I could really admire it in detail.  Then started reading the posts in Kathleen Tracy's yahoo Dear Jane group, which led to a challenge issued by Sheri Lesh, one of the moderators, to make one block.  So I thought, I can surely make one block.  Here is the link to that;  https://groups.yahoo.com/neo/groups/DearJaneSQT/info 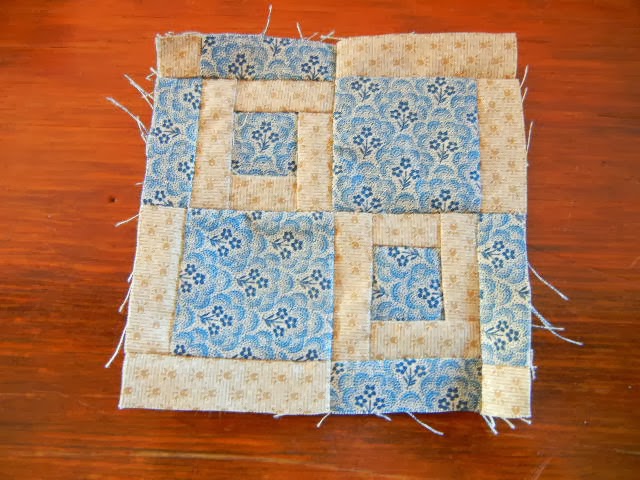 So here it is, all 4 1/2 inches of it.  Yes, those strips finish at 3/8 in., as well as that little square in the corner.  I hand pieced it, mostly because that little corner square scared the heck out of me.  I knew any of my sewing machines would eat it alive.  Sheri is challenging us to one block a week, I may soon have two blocks on a journey to 227.  Who wants to volunteer to finish my Dear Jane?  I don't think I will live long enough.  No one in my family has lived to 150.