After another hour today, that little block is done.  A little wonky and I had to use a different fabric to finish the outside row, but done is better than perfect, right?  I always underestimate how much fabric paper piecing requires, so ran out of the background after doing the center.  Here it is in all of its tiny glory. 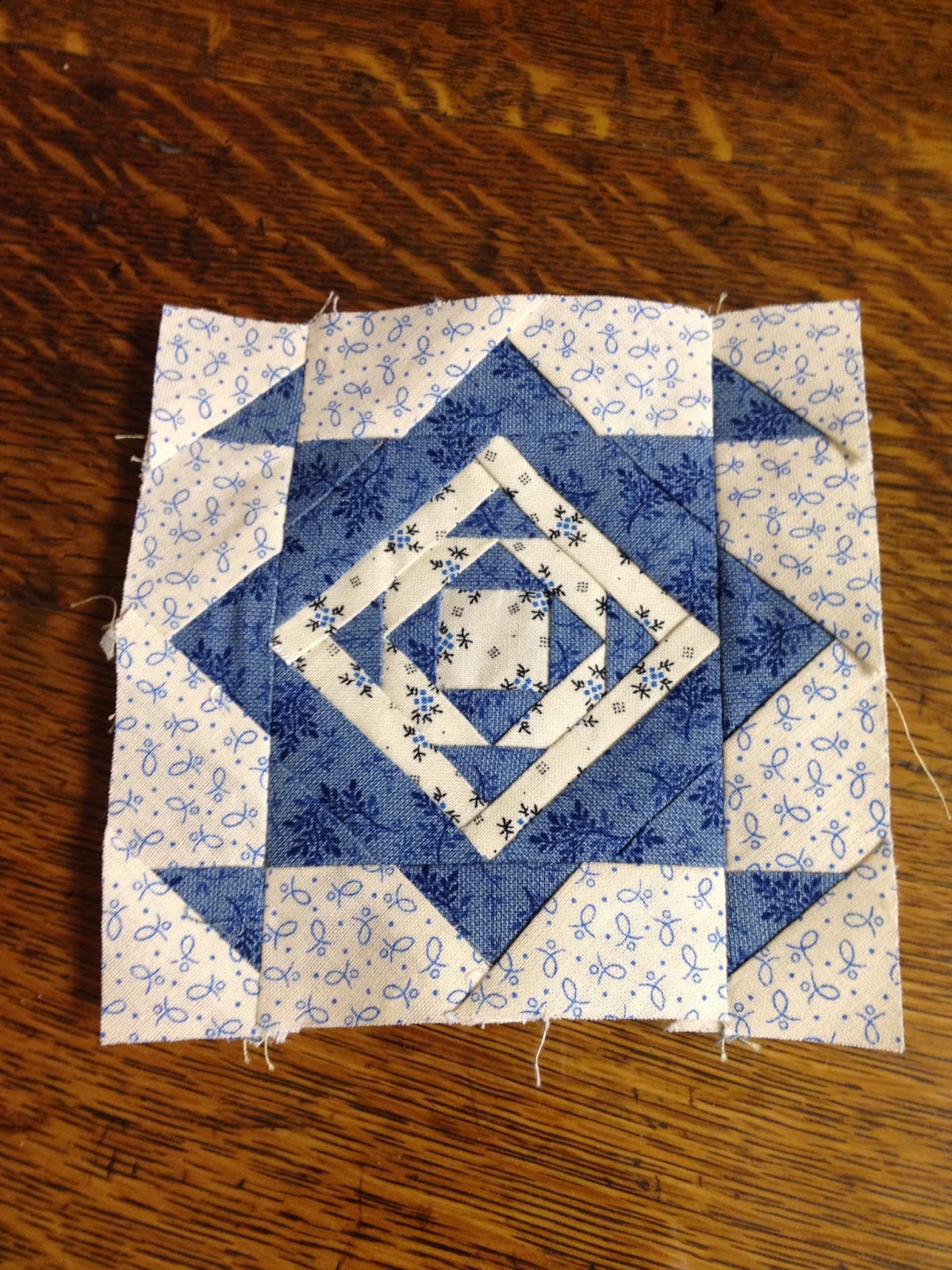 Have a great Labor Day week-end.  I hope you have time for some stitching.
Judy

Summer is coming to a close and even though it still feels like August, September is just around the corner.  It has been a pretty slow week around here.  We had a full week-end with company from Colorado, and had a great time.  Lola and I traveled to Stover and Excelsior for a little quilt shopping, so that was fun too.  Sunday was something of a let-down, as they left Sunday morning, so in the afternoon I went to the sewing room and started quilting on a project that had been sandwiched since May.  It has some mistakes in it, which I refuse to point out to you, so I haven't had much enthusiasm for finishing it.  But once I started the quilting it began to look better, so now I am pretty happy with it, mistakes and all.

I don't know why I can't keep up with this blog in the summer.  I suppose I just need to let everyone know I'm taking the summer off instead of just disappearing for several months.
I had a great vacation in June, visiting Williamsburg and Washington DC, traveling with a quilting friend.  We looked for antique quilts everywhere we went with no luck in finding them.  Not in Williamsburg, believe it or not.  We did see an occasional one in the historic homes we toured, but I suspect most were modern reproductions, as they were on beds, not behind glass.  I thought, for sure, we would see them in the Smithsonian.  They did direct us to a certain gallery, but the only quilt there was a small doll quilt (behind glass), that was a reproduction of a four patch, made for the bicentennial in 1976.  I'm sorry, that is not an antique quilt to someone who was making quilts in 1976. ( I also made matching bicentennial dresses for myself and my two daughters in that year.  The girls were adorable in them, by the way.)  We finally found someone who told us there were antique quilts in the Smithsonian collection, but they were in storage, and not on display.  So much for our tax-supported National Museum in Washington DC.  We did finally find a quilt museum on our way home in Harrisonburg VA, which was very nice, albeit small. 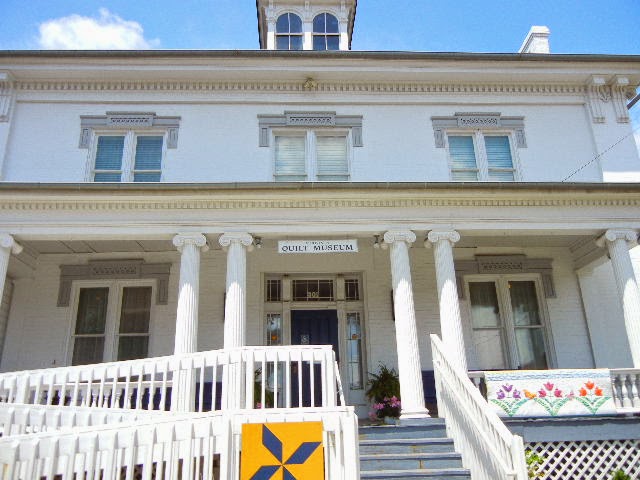 It was in an old house close to the center of town.  I'd recommend it if you are in the area.  No photos were allowed inside, of course.

I have done some sewing this summer.  I managed to get one quilt quilted of the two that I sandwiched in May.  I had a deadline on this one.  It was my UFO challenge for my guild and was due at the August meeting last week.  These were the birthday blocks from 2012.  I really like the setting. 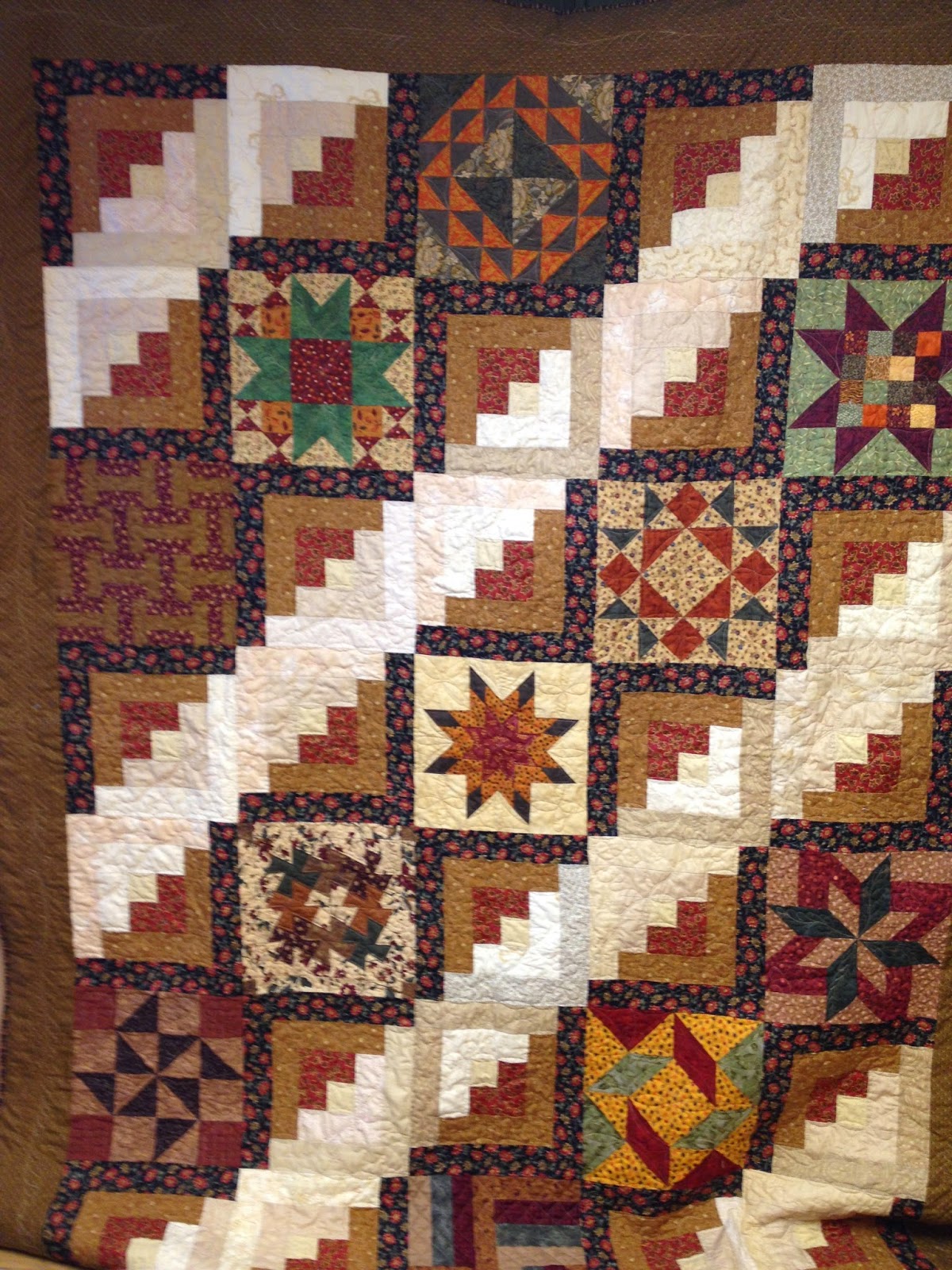 Here is a close-up of one of the blocks. 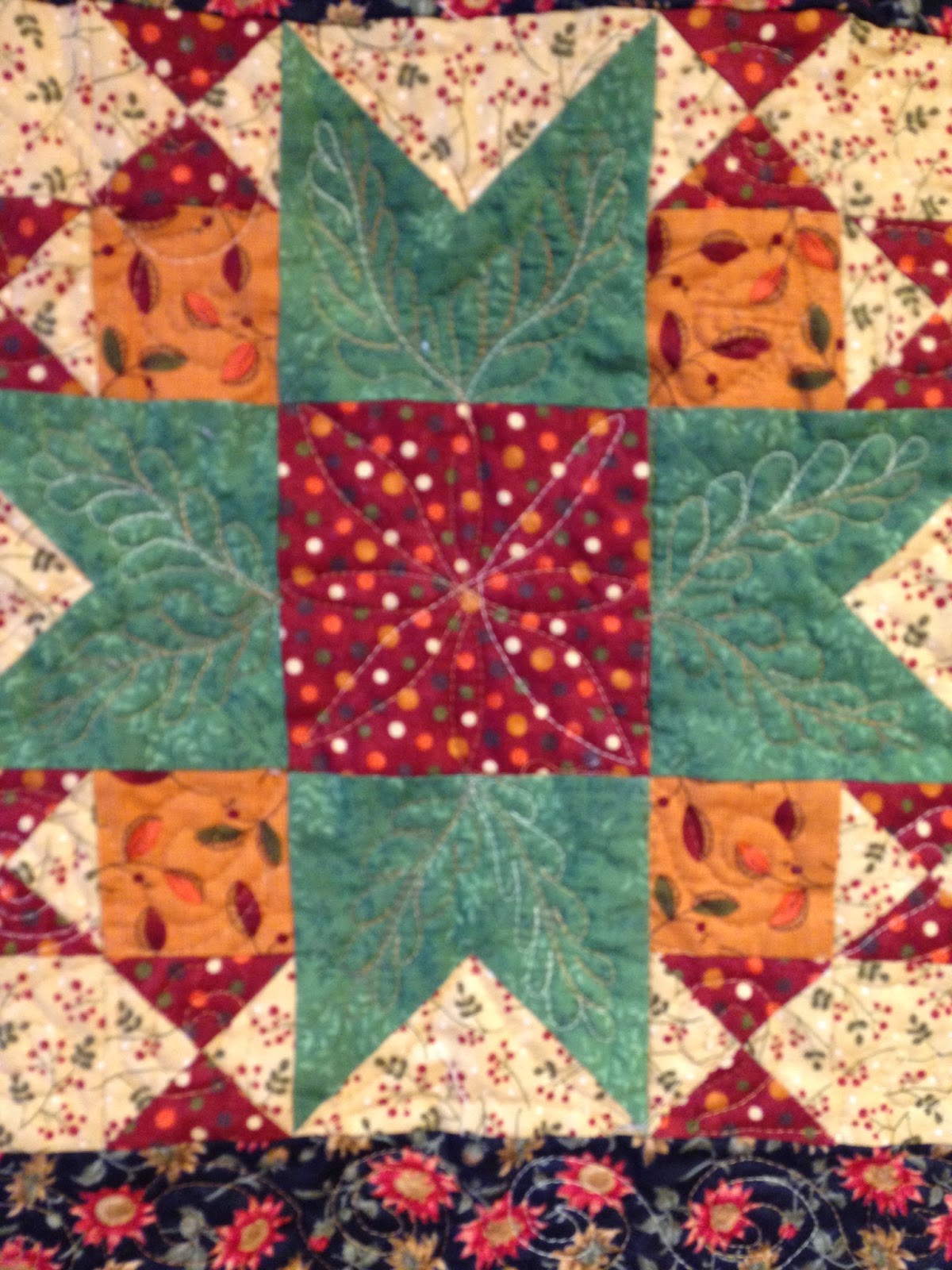 Speaking of Quilt Guild, here is a picture of some name tags I made for new members.  They finish at 4 inches.  There's not much room for error in a 4 inch block. 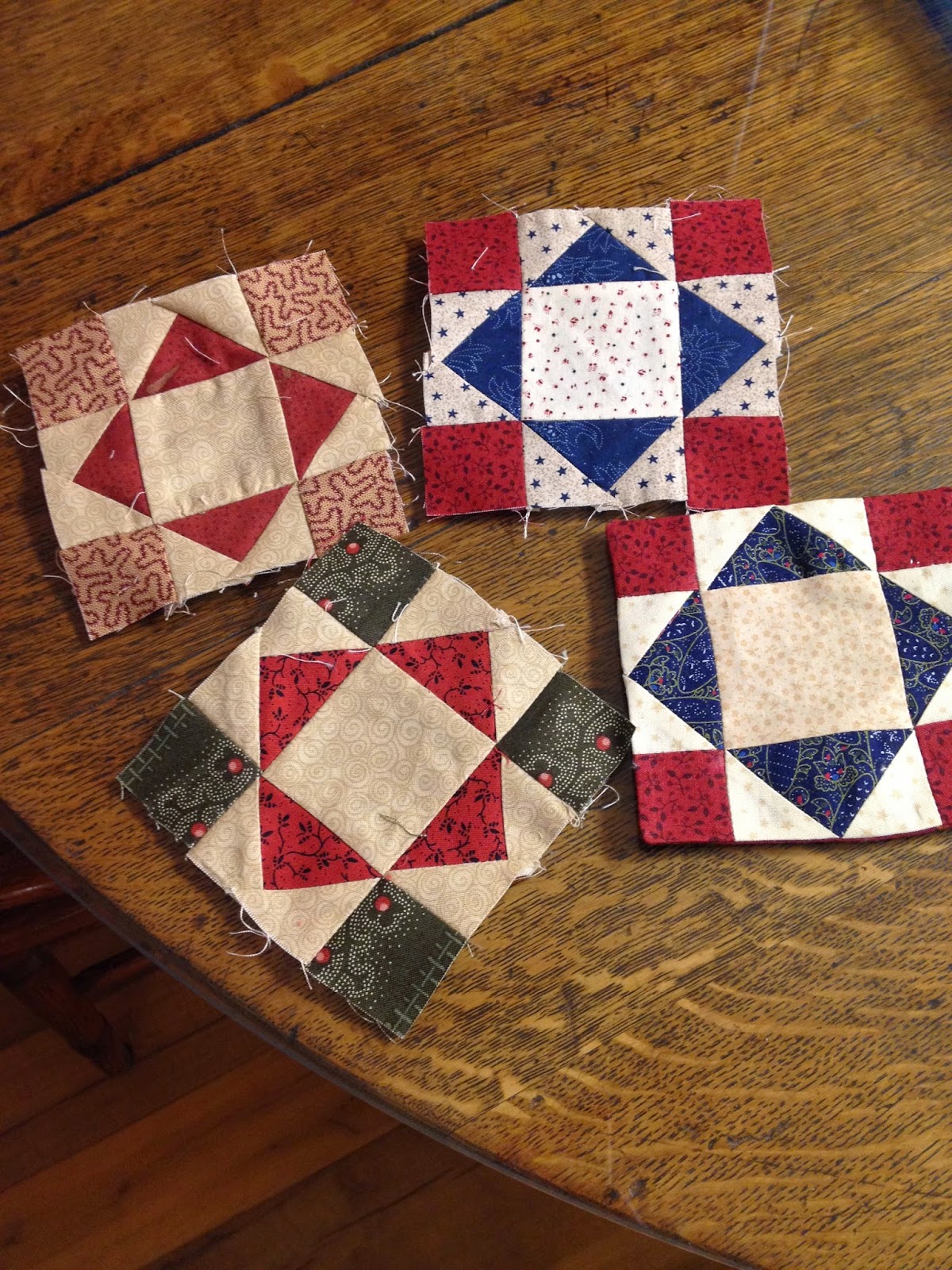 I went to a one-day sewing retreat in July and had a great time.  It was in Brunswick, MO, the location of Sew Sweet Quilt Shop, which has a beautiful new retreat center. www.sewsweetquiltstore.com, where we were privileged to meet Victoria Findlay Wolfe, visiting Missouri from New York. bumblebeansinc.com She makes some beautiful quilts and was a super nice person, in the bargain.
Here is what I was working on: 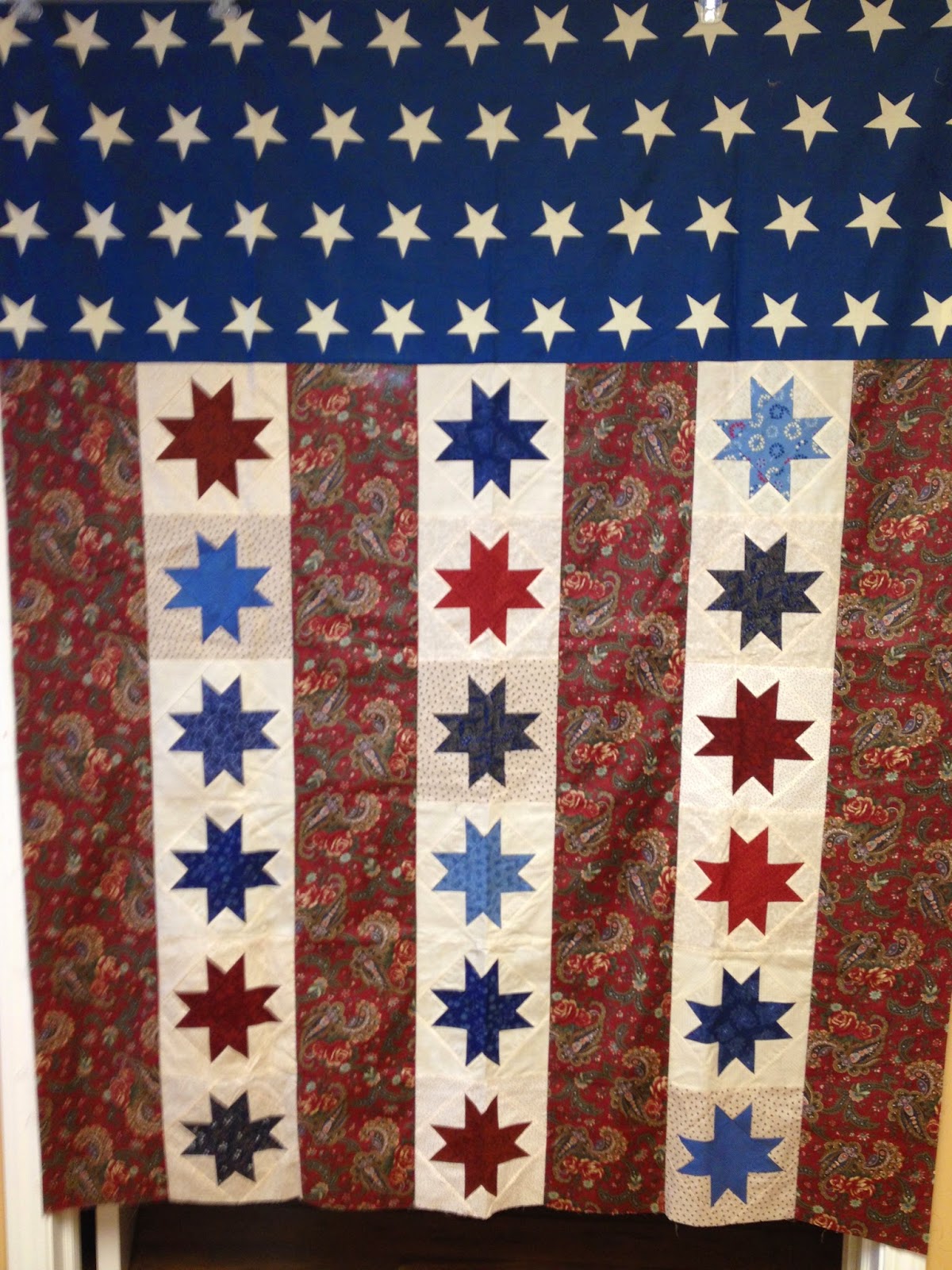 I picked up the pattern and bunting fabric in Atlanta in February and thought it was appropriate to work on in July.  The star fabric came out of the scrap bins.

I needed some handwork for the summer, for those long summer evenings when I want to be outside, but have difficulty just sitting in a lawn chair watching fireflies.  Here was the stitching project for those times. 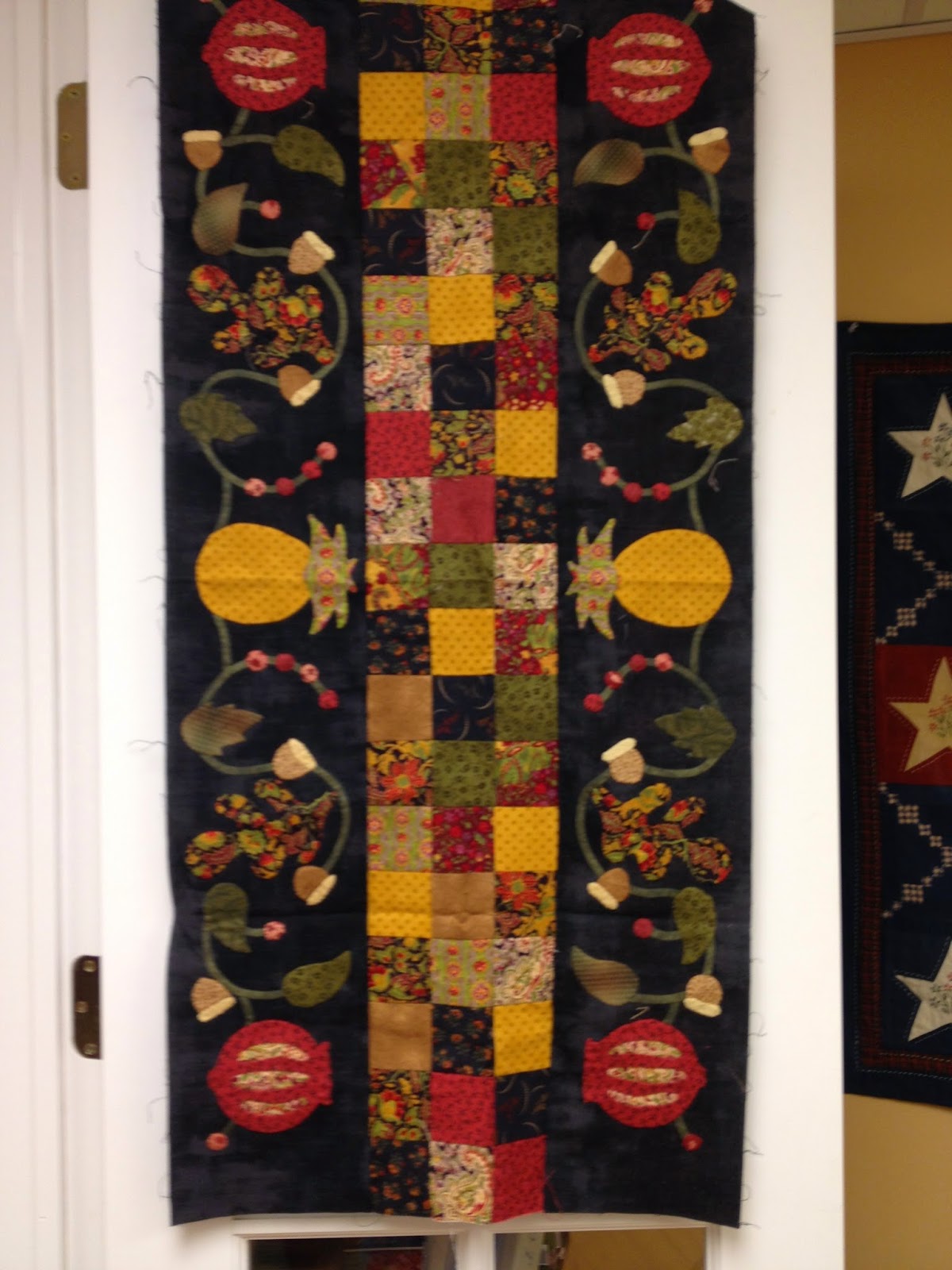 This is a pattern by Shelly Pagliai prairiemoonquilts.com.  Shelly taught at Arrow Rock Quilt Camp last spring and also organized the little retreat in Brunswick with Victoria Findlay Wolfe.  Shelly does a lot of the quilting for Victoria.  I wish I had pictures to show you of those.

One of my biggest projects of the summer was buying and refurbishing another vintage sewing machine.  I had long admired the machines called the "Pink Atlas".  They were a class 15 Japanese clone modeled after the Singer 15-91 and other class 15 machines.  Mine is a 1953 model, so would have been making its debut about the time I started sewing at age 9 or 10. 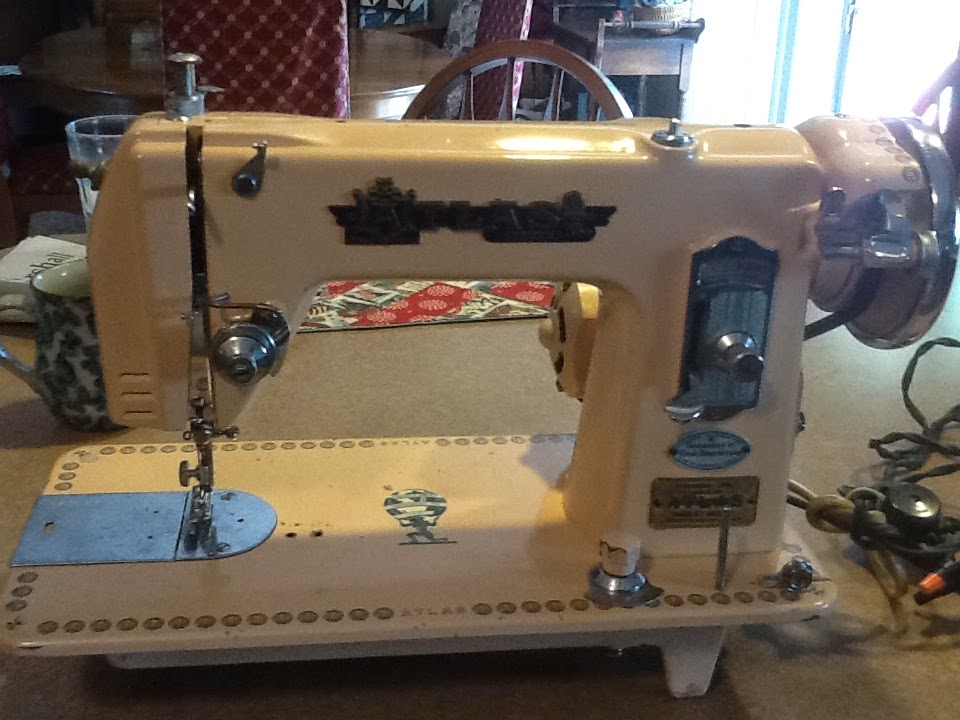 It is really more peach colored than pink, but has as much chrome as a cadillac of the era.  The case was in terrible shape with termite damage and a peeling cover. 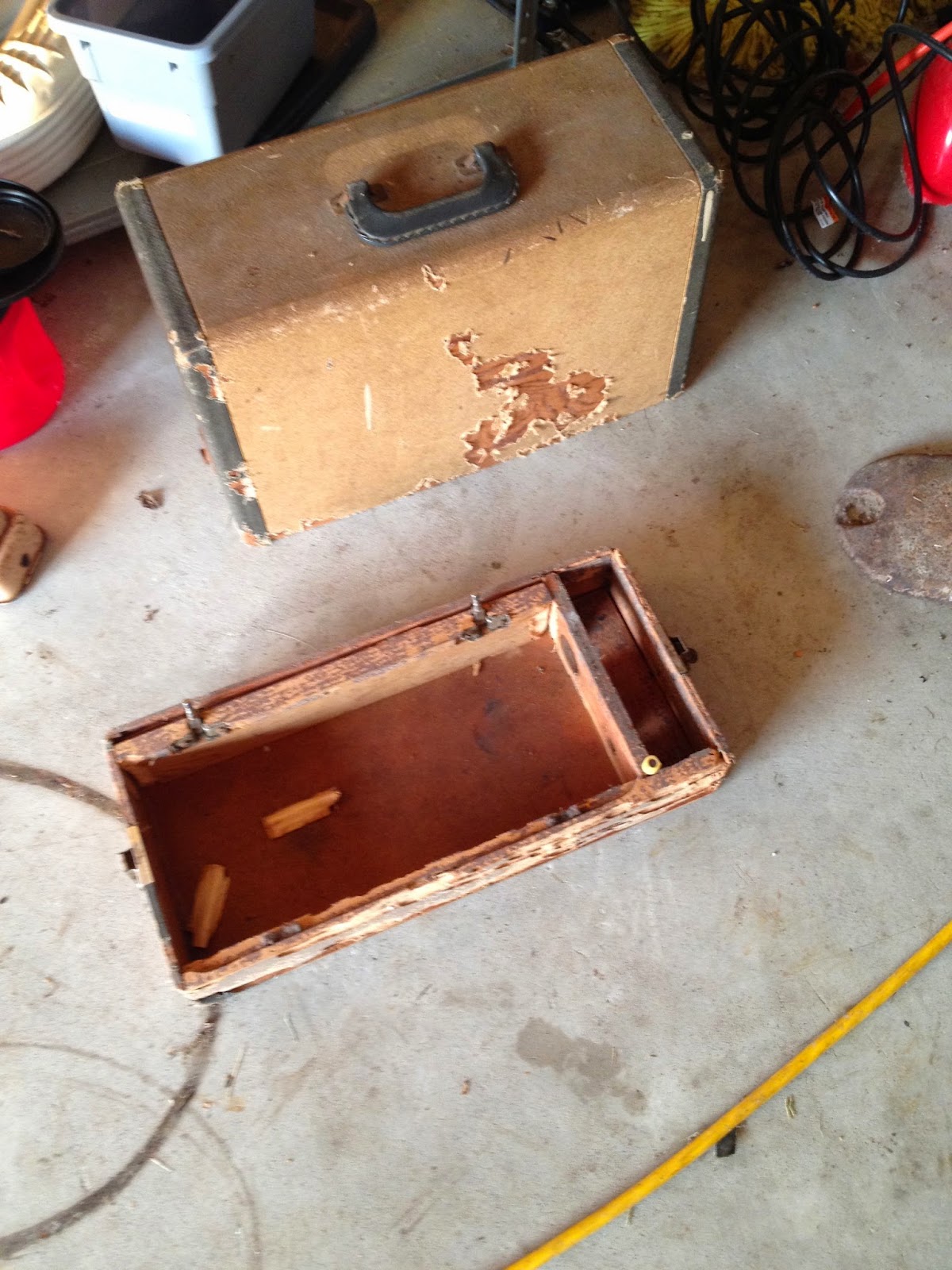 And here is the transformation; 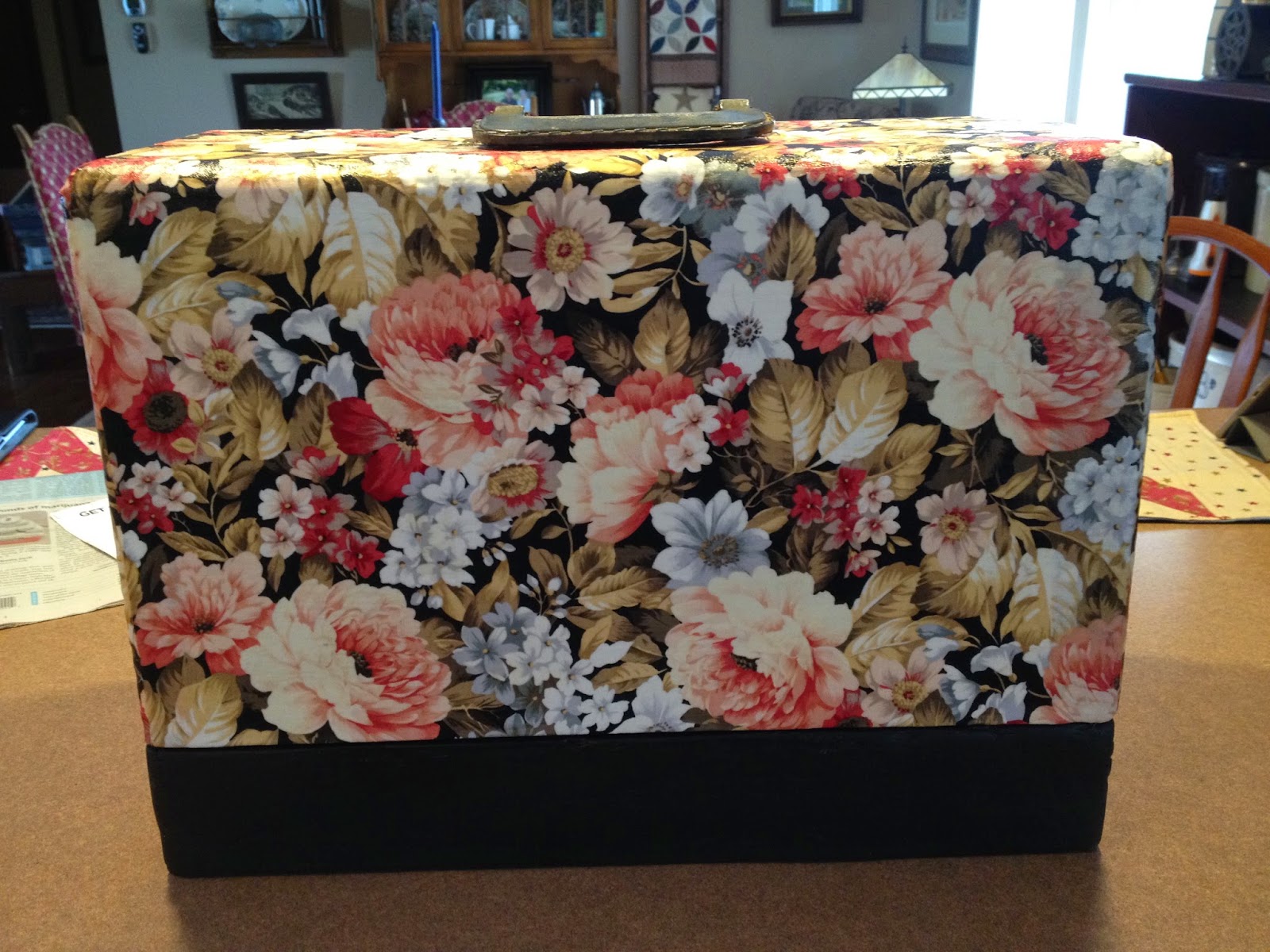 I haven't neglected my treadle with all the excitement of a "new" vintage machine.  Lest she feel forgotten, I took a paper piecing project to her this week, and she sewed like a champ.  Talk about control when you need to start and stop in a particular spot, she's the girl. 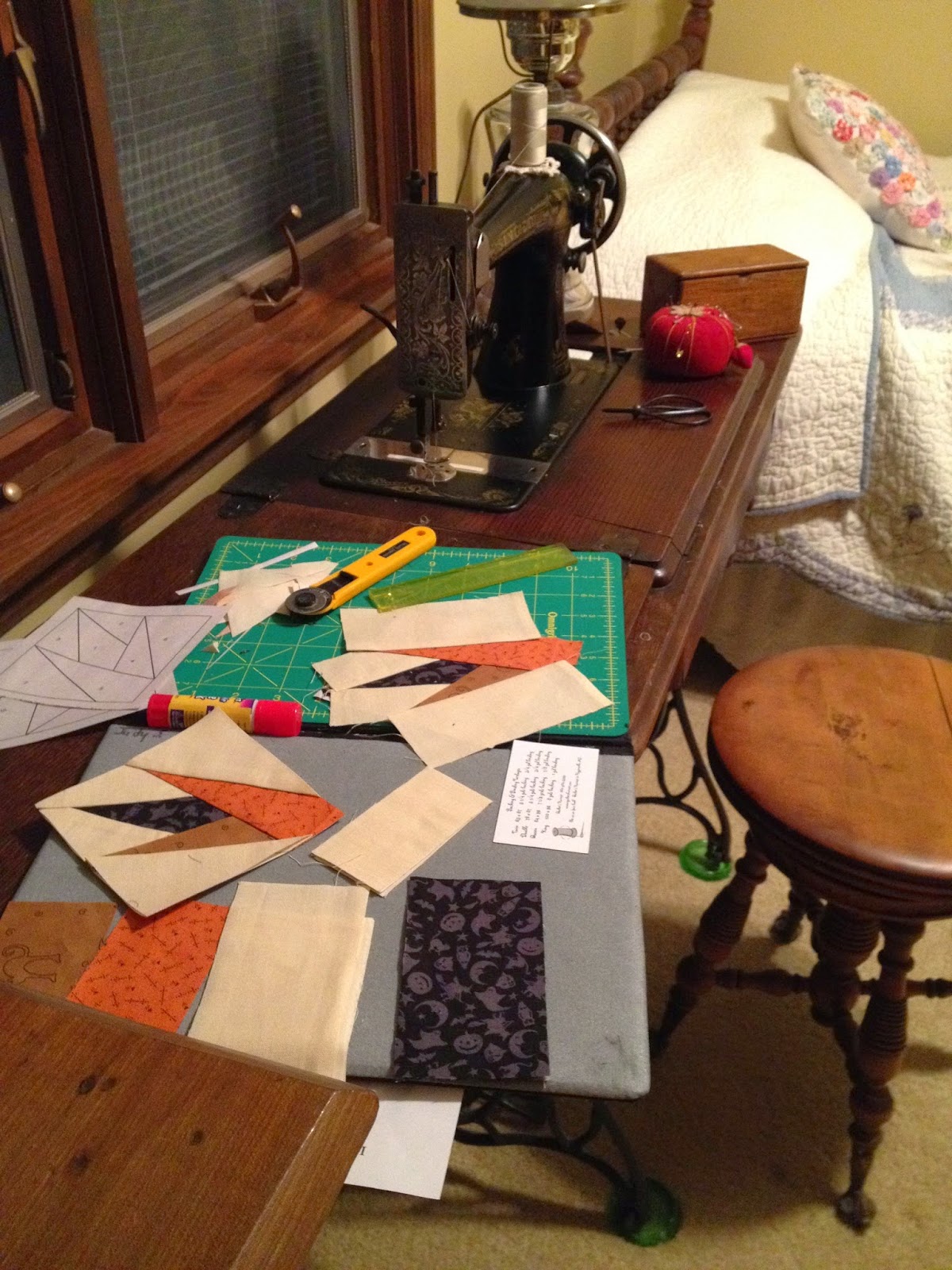