Dear Blogging Friends,
I’m starting the New Year by moving my blog to a different location.  I have found a different platform which allows me to post from my Ipad.  I think this will save time and hopefully encourage me to post a little more often.  I hope you will find me at this new location pickinstitchin.wordpress.com
and read my first entry about some scrap reduction in my sewing room.
Judy

October has been a busy month, but probably my favorite month of the year.  I love the colors, the temperatures and decorating my house with Halloween stuff.  First, let me share some of the colors of Missouri.  The trees have been spectacular this year, hitting their prime the last week of the month, a little later than usual. 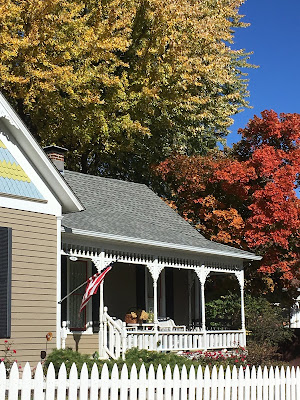 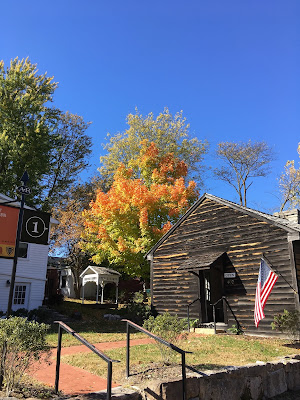 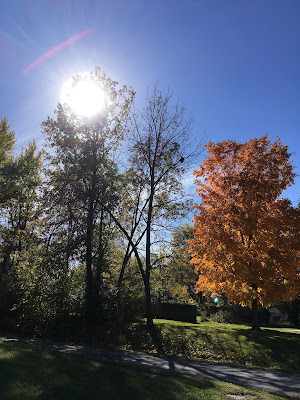 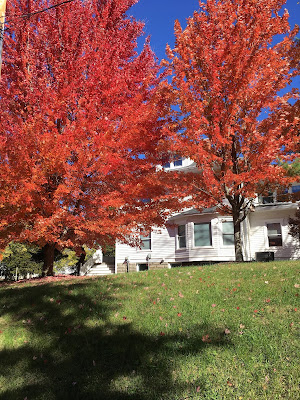 Our historic village is the perfect backdrop for October photos.
A couple of day trips within the state gave me some more fall photos. 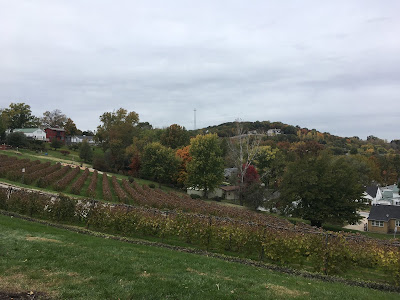 One to the winemaking capital of Missouri, Hermann, a community settled by German immigrants in the 19th century. 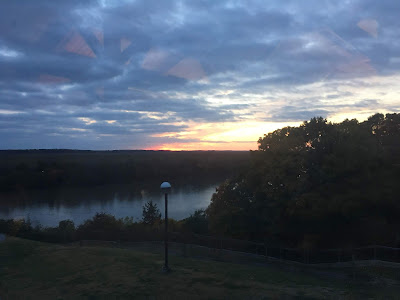 And one to the winery at Rocheport on the Missouri River for my birthday dinner.

I have been doing some sewing.  A neighbor asked me to make her granddaughter a quilt for her Christmas present.  That is what 9 y/o Briley had requested.  How can you say no to that?  I really have never wanted to do commission quilts.  I think it is very hard to communicate what you envision to someone who does not sew or make quilts.  My mind thinks in block designs and most non-quilters think in color, I believe.  I pulled several color collections from my stash and had Briley come over to the house.  She chose this blue and yellow combination in a churn dash patterned quilt.  The problem is the completed quilt she was looking at had a yellow background with floral churn dashes, Liberty of London florals.  This quilt will look nothing like that quilt, so I hope Grandma and Briley will like it for its own sake. 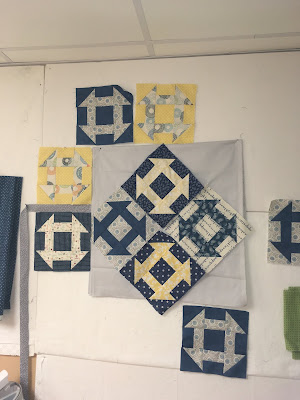 I forgot to post anything about my Early Works Mercantilehttp://earlywork-oldtrailprimitives.blogspot.com offerings on the 15th, so will show pics of those, as well. 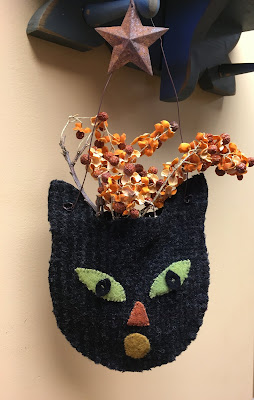 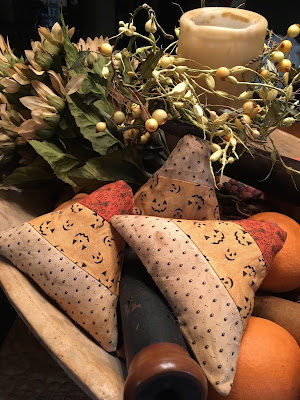 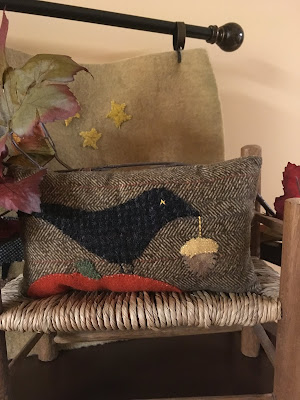 That's about all of the sewing I've accomplished since my last post.  There was a guild quilt show in October, though.  Maybe next time!
Judy
Posted by Judy Smith at 11/03/2018 1 comment: 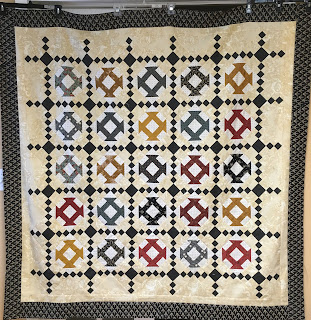 I tried it with both the straight set and the diagonal set, but chose the diagonal after all.  I would have needed more churn dash blocks and fewer chain blocks, so in the end it seemed easier to go with the pattern directions.  I did change the border treatment a little.  I had this wonderful print (Sturbridge Village) that worked so well with the background and the black chain piecing, so skipped the patchwork border. 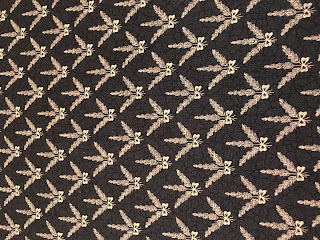 I have pulled this fabric out of the CW stack many times, thinking to use it.  So glad it was still there for this quilt!

Now to move on to making projects for my October 15th update to Early Works Mercantile.  It will feature Autumn and Halloween items as I'm not ready to move on to Christmas yet.

On the Rughooking front, I'm trying to get this class project finished as I have a Halloween project I want to work on next. 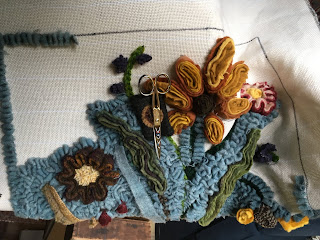 So not only will I keep on stitchin, but will be pulling loops as well.
Judy

I've been back in the sewing room this week.  This comes from one of the classes I took at Quilt Camp in May.  It was taught by Quilter Extraordinare, Klonda Lightfoot.  She teaches at camp every year and always has an interesting quilt to tackle.  This was my first year as a student after 5 years as the Mystery Quilt teacher, so was anxious to take one of her classes.  This pattern was in a Quiltmaker magazine and named Churn Dash Checkers.  I do love me a Churn Dash block, so knew I would enjoy making it. 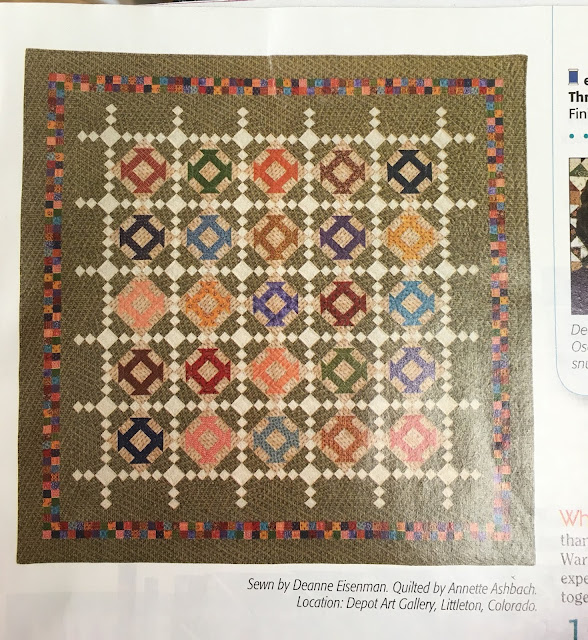 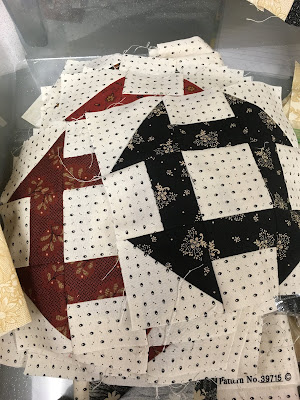 I have all of the Churn Dash blocks done and about 6 of the chain blocks.  I need 36 of them. 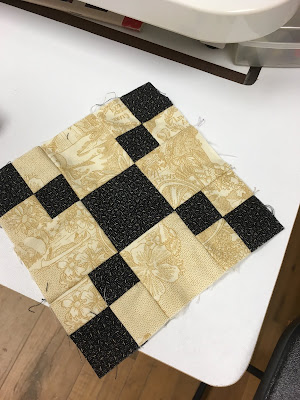 They are pretty simple.  You strip piece the little 4 patches, then put the 9 patch together. 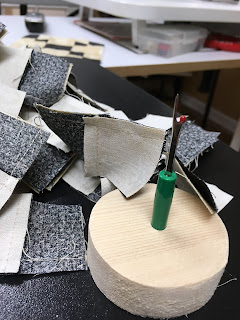 I have two new gadgets to help with the four patch units.  This little homemade thread cutter makes cutting the chain pieced units apart much faster...... 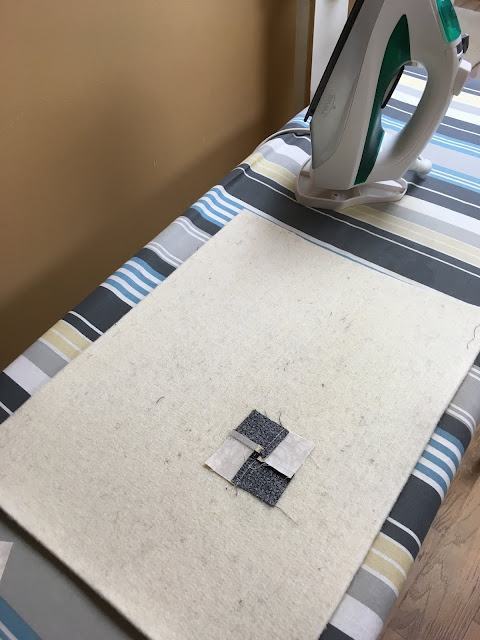 And then my new wool pressing pad makes pressing them go faster.  My friend Julie brought me this piece of wool felt from a recent trip, from the country of Latvia.  Apparently, embroidered felt decorations and clothing is one of their traditional crafts.  She found a shop featuring felted wool, thinking she was bringing me something for my wool applique.  She was probably surprised when I pounced on it as a pressing mat.  I have been reading about them and wanted to try one, but they are pretty pricey.  But, after pressing 120 of these little 4 patches, I can tell you that they are definitely worth it.
Now back to the sewing room to begin putting this top together.  The directions place the blocks in a diagonal set, but I want to try it with a straight set too.  I  like Churn Dash blocks better in a straight set and think I would like a diagonal chain effect better than the horizontal/vertical chain.  Any opinions on this question?

I just posted my September 15th update to the Early Works Mercantile site http://earlywork-oldtrailprimitives.blogspot.com, but have a fun picture to share with my blog readers. 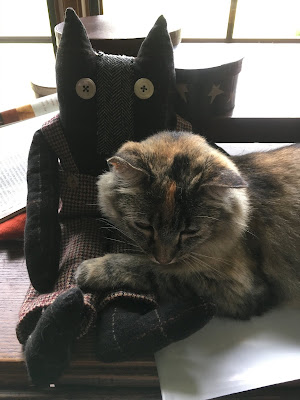 Yes, Tallullah will be sorry to see anyone buy ScaredyKat.  She especially loves his feet, although she is also a little frightened of them.  It's hilarious to watch. 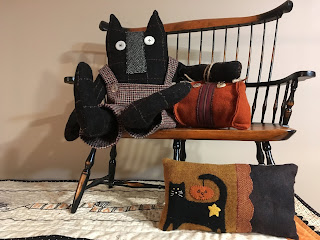 Here is the picture that made the cut for the website. 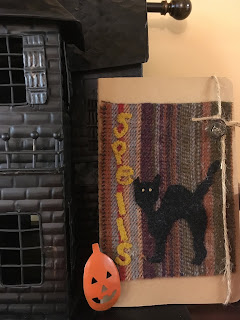 And here is the "Spells" notebook, that was carried over from the August update.

And a better picture of the table runner.  I actually made this a couple of years ago as a bolster pillow, but didn't use it much.  ( My husband doesn't like decorative pillows on the bed.)  So, I took it apart, quilted it and I think I will use it as a table runner if it doesn't sell.  I find that is the best plan with a selling site like Early Works, make things you like and would use in your house anyway.

In another piece of news, my grandson brought me a treasure from the trash at his workplace.  It is a bag stitcher from a seed processing plant.  Isn't it cool?  I had him carry it to the sewing room for me, but now will have to bribe him with a steak to have it moved to where I will eventually
display it.  It must weigh 50#.  He said it was mounted on the side of its working location and I originally thought I would do that too (when I first saw a picture).  I don't have anything in my house heavy enough to hold it mounted sideways. 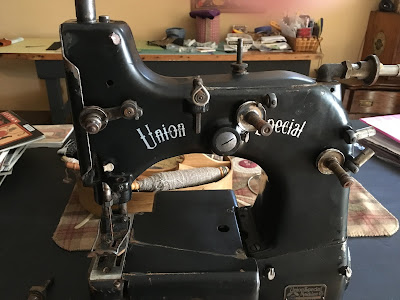 My understanding is it had a separate motor and pulley system and that upper projection on the right held an oil bottle.  As he said, it was too much history to throw in the trash.  His dad thinks it probably dates to the 1940's.

That's all my news for today.
Keep on stitchin'
Judy

It’s been awhile since I've written a post. It’s not that I haven’t thought of it. I just didn’t think I had anything interesting to write. I had a knee replacement in March. No one wanted to hear me whine about that. Then April was spent going back and forth to physical therapy, a 20 mile trip both ways. It seemed I had no energy for anything else after that. See, I did get to whine. I can’t tell you where the other months have gone, but here I am in September, finally beginning to feel like sewing and talking about it. My Smith Mountain Morning is finally done! I declared it as my main UFO for my guild challenge so that gave me the push to get it done. Following are some progress photos.

I didn’t use the tri-Rec ruler as instructed in the pattern. I had lots of HSTs left from the star blocks so wanted to use them and besides, I’m lazy and don’t enjoy making those tri-rec points. Putting rows together and singing Hallelujah.

Our Guild supports a local charity which is a facility for abused and neglected children. They have a need for twin sized quilts, especially extra long ones for teenage boys. I made this top last year, also pieced a backing and made a scrappy binding, but never got it quilted. Carrie, one of my team partners, is a long arm Quilter, so she quilted it and I bound it. Bingo, our charity quilt done, my TBQ (to be quilted) stack lowered, and a tall teenager will have a quilt to take with him when he goes to foster care or an improved home situation. So, that’s what I’ve been up to in the sewing room.
I did get a lot of rug hooking done while taking care of my knee, but will save that for another post.Judy
Save 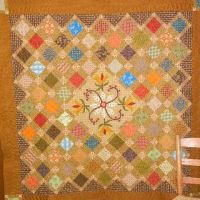 The first snow day of the year!  Only about 2 inches, but enough to drift a little and make the roads ickky. 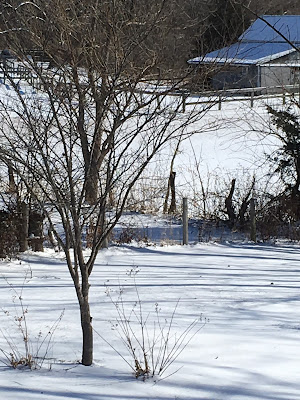 I cancelled an appointment this morning and a meeting was cancelled this afternoon, so I get to stay home and putter, also sew and hook.  But first, the dreaded laundry.  (No pictures of that.  Who would  want to see it?)